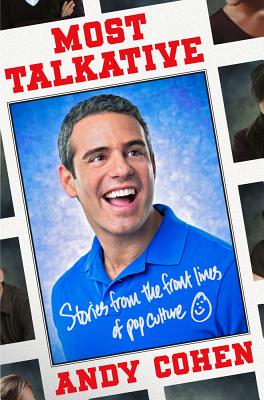 Stories from the Front Lines of Pop Culture

The man behind the "Real Housewives" writes about his lifelong love affair with pop culture that brought him from the suburbs of St. Louis to his own television show
From a young age, Andy Cohen knew one thing: He loved television. Not in the way that most kids do, but in an irrepressible, all-consuming, I-want-to-climb-inside-the-tube kind of way. And climb inside he did. Now presiding over Bravo's reality TV empire, he started out as an overly talkative pop culture obsessive, devoted to "Charlie's Angels" and "All My Children "and to his mother, who received daily letters from Andy at summer camp, usually reminding her to tape the soaps. In retrospect, it's hard to believe that everyone didn't know that Andy was gay; still, he remained in the closet until college. Finally out, he embarked on making a career out of his passion for television.

The journey begins with Andy interviewing his all-time idol Susan Lucci for his college newspaper and ends with him in a job where he has a hand in creating today's celebrity icons. In the witty, no-holds-barred style of his show "Watch What Happens Live," Andy tells tales of absurd mishaps during his ten years at CBS News, hilarious encounters with the heroes and heroines of his youth, and the real stories behind "The Real Housewives." Dishy, funny, and full of heart, "Most Talkative" provides a one-of-a-kind glimpse into the world of television, from a fan who grew up watching the screen and is now inside it, both making shows and hosting his own.


Praise For Most Talkative: Stories from the Front Lines of Pop Culture…

"[Cohen] is funny as Augusten Burroughs used to be...[Most Talkative] requires zero interest in 'Top Chef,' 'Real Housewives' or anything else on Bravo to find him highly entertaining company through this joke-filled joy ride."--The New York Times

“Andy Cohen’s new book Most Talkative is laugh-out-loud funny.  Anyone who likes pop culture will really like this book.  It’s a perfect read for this summer.”--Anderson Cooper

"Ladies, put 50 Shades aside for Andy Cohen's Most Talkative, a book about friendship, family, and fun. His coming out story will break your heart."--Jessica Seinfeld

“Most Talkative is Andy Cohen’s story from starting out as an intern for CBS news and working his way up the ranks through programming and then eventually becoming a personality himself.  He’s a really funny writer!”--Kelly Ripa

“A wonderfully fun, funny and inspirational journey, peppered with colorful, crisis prone women.  I loved it! Most Talkative is most read-ative!”--Amy Sedaris, author of I Like You and Simple Times

Andy Cohen is Bravo's executive vice president of Development and Talent, responsible for overseeing the production of such hits as "Top Chef "and "The Real Housewives" franchises. In addition, Cohen is the host and executive producer of "Watch What Happens Live," Bravo's late-night, interactive talk show. He also hosts the network's reunion specials. He's won an Emmy and two Peabody Awards for his work, and he lives in New York City.
Loading...
or
Not Currently Available for Direct Purchase