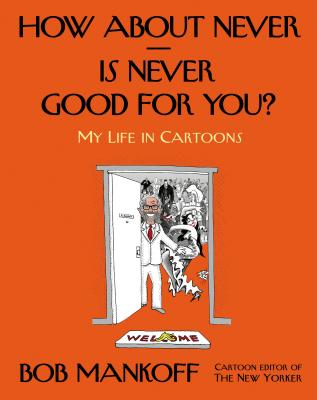 How About Never--Is Never Good for You? (Hardcover)

My Life in Cartoons

People tell Bob Mankoff that as the cartoon editor of The New Yorker he has the best job in the world. Never one to beat around the bush, he explains to us, in the opening of this singular, delightfully eccentric book, that because he is also a cartoonist at the magazine he actually has two of the best jobs in the world. With the help of myriad images and his funniest, most beloved cartoons, he traces his love of the craft all the way back to his childhood, when he started doing funny drawings at the age of eight. After meeting his mother, we follow his unlikely stints as a high-school basketball star, draft dodger, and sociology grad student. Though Mankoff abandoned the study of psychology in the seventies to become a cartoonist, he recently realized that the field he abandoned could help him better understand the field he was in, and here he takes up the psychology of cartooning, analyzing why some cartoons make us laugh and others don't. He allows us into the hallowed halls of The New Yorker to show us the soup-to-nuts process of cartoon creation, giving us a detailed look not only at his own work, but that of the other talented cartoonists who keep us laughing week after week. For desert, he reveals the secrets to winning the magazine's caption contest. Throughout How About Never--Is Never Good for You?, we see his commitment to the motto "Anything worth saying is worth saying funny."

Bob Mankoff is the cartoon editor for The New Yorker. Before he succeeded Lee Lorenz as editor, Mankoff was a cartoonist for the magazine for twenty years. He founded the online Cartoon Bank, which has every cartoon since the magazine's founding. He is the author of the book The Naked Cartoonist: A New Way to Enhance Your Creativity.

Praise For How About Never--Is Never Good for You?: My Life in Cartoons…

“Lucid, illuminating, and encouraging . . . How About Never – Is Never Good for You? is not just a charming memoir but also a charming grab bag of cartoon history, cartoon theory (nothing too woolly) and shoptalk.” —New York Times Book Review

“Mankoff's deep understanding of humor, both its power and its practice, is the live wire that crackles through his new book . . . How About Never is more than a memoir . . . it's also an enormous window into the mystery and alchemy behind the creation and selection of New Yorker cartoons.” —The Washington Post

“Evidence that the New Yorker's cartoons can still unerringly reflect the texture of our times.” —The Wall Street Journal

“This is a generous book, giving abundant credit to both the older generation of cartoonists whom the young Mr. Mankoff hero-worshiped to the new blood he has brought to the magazine during his tenure.” —Janet Maslin, The New York Times

“By mixing his snappy-banter writing with actual New Yorker cartoons, Mankoff offers fascinating insight into the professional trials and artistic struggles of a cartoonist--and his own method of defining what, precisely, makes a New Yorker cartoon.” —Entertainment Weekly

“How About Never serves up not only a mini-collection of great cartoons but also a look at the shift in styles through the editorships of legendary William Shawn, Tina Brown, and current editor David Remnick. Mankoff also provides a very funny and insightful look at how to win The New Yorker caption contest. . . A must read for devotees of the magazine.” —Publishers Weekly

“Fascinating . . . Mankoff offers a number of tips on the ‘intelligent humor' that makes it into the New Yorker--and even how to better your odds in the weekly caption process . . . Those who aspire to a career drawing for the New Yorker will find this essential reading.” —Kirkus

“[Mankoff] delivers a witty and informative behind-the-scenes look at contemporary America media's most prominent home for great cartooning. Anyone who turns to the cartoons as soon as they get a new issue will devour this delightful book with relish.” —Shelf Awareness

“Bob Mankoff's fascinating, forthright, and funny book provides an inside look at the nuts and bolts of New Yorker cartoons: how the artists come up with ideas, how the cartoons are selected, the workings of the famous Caption Contest, and much more. Mankoff also writes with first-hand knowledge about the topic of laughter itself. He dares to ask the question, ‘What makes something funny?', and answers it with intelligence, originality, and, of course, humor.” —Roz Chast

“Is Bob Mankoff mad, a genius, or a mad genius? This book does not answer that question, but you'll love it.” —Andy Borowitz

“More than anyone, Bob Mankoff has kept the New Yorker tradition in cartooning alive, while managing to oversee its renewal. He's also a very funny guy, with either a stipple-pen in his hand or a computer keyboard beneath his fingers. And, if that's not enough, he's one of the few funny guys around who actually has something sensible to say about what makes funny funny and he does so here.” —Adam Gopnik

“Hilarious... a unique look at how the best cartoons in the world are created.” —Christopher Guest