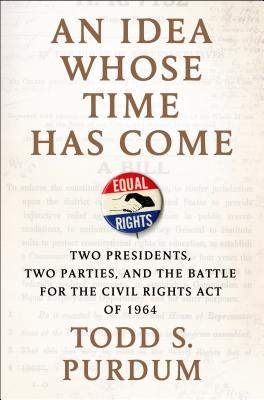 An Idea Whose Time Has Come

Two Presidents, Two Parties, and the Battle for the Civil Rights Act of 1964

A top Washington journalist recounts the dramatic political battle to pass the Civil Rights Act of 1964, the law that created modern America, on the fiftieth anniversary of its passage

It was a turbulent time in America—a time of sit-ins, freedom rides, a March on Washington and a governor standing in the schoolhouse door—when John F. Kennedy sent Congress a bill to bar racial discrimination in employment, education, and public accommodations. Countless civil rights measures had died on Capitol Hill in the past. But this one was different because, as one influential senator put it, it was "an idea whose time has come."

In a powerful narrative layered with revealing detail, Todd S. Purdum tells the story of the Civil Rights Act of 1964, recreating the legislative maneuvering and the larger-than-life characters who made its passage possible. From the Kennedy brothers to Lyndon Johnson, from Martin Luther King Jr. to Hubert Humphrey and Everett Dirksen, Purdum shows how these all-too-human figures managed, in just over a year, to create a bill that prompted the longest filibuster in the history of the U.S. Senate yet was ultimately adopted with overwhelming bipartisan support. He evokes the high purpose and low dealings that marked the creation of this monumental law, drawing on extensive archival research and dozens of new interviews that bring to life this signal achievement in American history.

Often hailed as the most important law of the past century, the Civil Rights Act stands as a lesson for our own troubled times about what is possible when patience, bipartisanship, and decency rule the day.


Praise For An Idea Whose Time Has Come: Two Presidents, Two Parties, and the Battle for the Civil Rights Act of 1964…

“Today's reader will be startled, if not astonished, by how the bill made its way through Congress.” —The Washington Post

“Purdum's version of this story is excellent…. An astute, well-paced, and highly readable play-by-play of the bill's journey to become a law.” —The Atlantic

“A lively, informative account of the story behind the Civil Rights Act of 1964…. Purdum conveys a palpable sense of excitement akin to that created by Steven Spielberg in his recent film ‘Lincoln' in describing how the bill's backers finally broke the longest filibuster in Senate history.” —The Plain Dealer (Cleveland)

“[A] well-crafted narrative … The author's assessment of the two presidents [JFK and LBJ] is insightful and nuanced.” —The Miami Herald

“When we think back on the Civil Rights Act we naturally think of the role played by big figures who are familiar to us--such as Lyndon Johnson, Everett Dirksen, Martin Luther King. But one of the great virtues of An Idea Whose Time Has Come is the way it brings some lesser-known people to the fore.” —Vanity Fair

“A fascinating, blow by blow account.” —All Things Considered, NPR

“The book reminds the nation that even the best-intentioned leaders remain flawed, because they are still human.” —U.S. News & World Report

“[A] wonderful new history of the passage of the Civil Rights Act.” —John Dickerson, CBSNews.com

“[A] great book … recounting the twists and turns that led to the passage of the Civil Rights Act…. Todd Purdum's An Idea Whose Time Has Come … [reads] today like breakneck drama … [and describes] in detail a time when the rules of the political road included bipartisanship, clever backroom dealing, and at the end of the day, moral suasion.” —Gwen Ifill, Gwen's Take, PBS.org

“One of the books of the year.” —Mike Allen's Playbook, Politico

“Purdum, a contributing editor at Vanity Fair, skillfully recalls these men and their roles through the three sections of his history, which trace the bill through the administration to the House and finally the Senate.” —The Boston Globe

“Purdum's book [is] more necessary now than ever…. Purdum's book is especially good at recounting how the struggle in the streets …galvanized politicians to push the bill past its last hurdles…. Purdum's focus on each hard-won step in Congress keeps the story real and true, making the book an excellent resource on the legislation that, as the author says, ‘created the modern world.'” —Washingtonian

“[Purdum] skillfully retraces the act through a legislative minefield…. Purdum composes portraits of civil rights icons including Martin Luther King Jr….but his most important contribution is reintroducing readers to largely forgotten heroes…. Readers who enjoy modern American historical narratives will be gripped by this title that is an excellent companion to Gary May's Bending Toward Justice.” —Library Journal (starred review)

“A riveting account of the hard-fought passage of 'the most important laws of the twentieth century.'...Insightful and wholly mindful of the calculations that JFK and LBJ made at every step...A must-read.” —Kirkus Reviews

“An Idea Whose Time Has Come is brilliantly rendered and emotionally powerful – a riveting account of one of the most dramatic and significant moments in American history. The story Todd Purdum tells is absolutely mesmerizing.” —Doris Kearns Goodwin

“Todd Purdum's history of the 1964 Civil Rights Act is a masterful reconstruction of a seminal American event. He brilliantly captures the actors and drama that made this transformation in the country's social relations a reality. Everyone interested in contemporary America will want to read this book.” —Robert Dallek

“Todd Purdum brings alive Congress's great historic achievement: the passage of the 1964 Civil Rights Act. The heroes are J.F.K. and L.B.J., but also those Midwest Republicans who stayed true to Lincoln. Those are the quietly eloquent stories here, the profiles in decency and guts, where members of Congress honored values greater than current popularity. An Idea Whose Time Has Come shows once again that the real action in American politics takes place in the back room – and in that quieter place: the beating hearts of the decent and courageous.” —Chris Matthews

“In Todd Purdum's gripping account of the passage of the Civil Rights Act of 1964, we can see, from nearly every angle, how the federal government began making good on the ‘promissory note' of equal rights that Dr. King had invoked at the March on Washington. Purdum provides both an invaluable education in the political process and a keen understanding of how personalities (the famous and the unsung) and the best of both parties overcame every roadblock to ‘make real the promises of democracy,' as Dr. King had challenged.” —Henry Louis Gates, Jr.

“The story behind the passage of the landmark Civil Rights Bill of 1964 is one that all Americans should know. An Idea Whose Time Has Come, Todd Purdum's insightful and elegantly written narrative, brings this history to life with deft portraits of the people who made the law and those who fought against it. It is a must read for all who are interested in the transformative power of the law and government to make positive changes in the lives of citizens.” —Annette Gordon-Reed

“Todd Purdum's remarkable An Idea Whose Time Has Come brings back to life the historic fight waged on behalf of civil rights by JFK and LBJ. Purdum is a superb writer, never dull, and his grasp of the Sixties milieu is foolproof. This is a marvelous and much needed book of lasting importance.” —Douglas Brinkley

“Todd Purdum's fascinating behind-the-scenes account of the birth of the Civil Rights Act of 1964 is a timely and hopeful reminder that sometimes the good guys do win, even in Washington.” —Jeffrey Toobin

“As we approach the golden anniversary of this landmark equal-rights and public-accommodations bill, veteran journalist Purdum painstakingly details how its passage came about. In short, not easily.... It is instructive to read about the hard work, passion, intense political negotiation, and collegial respect that went into the enactment of this historic legislation 50 years ago.” —Booklist

Todd S. Purdum is the author of An Idea Whose Time Has Come and A Time of Our Choosing. He is a contributing editor at Vanity Fair and a senior writer at Politico, having previously worked at The New York Times for more than twenty years, where he served as White House correspondent, diplomatic correspondent, and Los Angeles bureau chief. A graduate of Princeton University, he lives in Los Angeles with his wife, Dee Dee Myers, and their two children, Kate and Stephen.