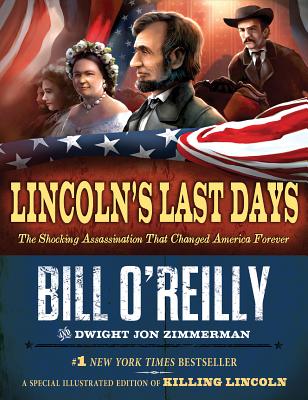 Lincoln's Last Days is a gripping account of one of the most dramatic nights in American history—of how one gunshot changed the country forever. Adapted from Bill O'Reilly's bestselling historical thriller, Killing Lincoln, this book will have young readers—and grown-ups too—hooked on history.

In the spring of 1865, President Abraham Lincoln travels through Washington, D.C., after finally winning America's bloody Civil War. In the midst of celebrations, Lincoln is assassinated at Ford's Theatre by a famous actor named John Wilkes Booth. What follows is a thrilling chase, ending with a fiery shoot-out and swift justice for the perpetrators.

With an unforgettable cast of characters, page-turning action, vivid detail, and art on every spread, Lincoln's Last Days is history that reads like a thriller. This is a very special book, irresistible on its own or as a compelling companion to Killing Lincoln.

“As a history major, I wish my required reading had been as well written as this truly vivid and emotionally engaging account of Lincoln's assassination. And as a former combat infantry officer, I found myself running for cover at the Civil War battle scenes. This is the story of an American tragedy that changed the course of history. If you think you know this story, you don't until you've read Killing Lincoln. Add historian to Bill O'Reilly's already impressive résumé.” —Nelson DeMille, author of The Lion and The Gold Coast on Killing Lincoln

“Killing Lincoln is a must read historical thriller. Bill O'Reilly recounts the dramatic events of the spring of 1865 with such exhilarating immediacy that you will feel like you are walking the streets of Washington DC on the night that John Wilkes Booth shot Abraham Lincoln. This is a hugely entertaining, heart-stopping read.” —Vince Flynn, author of American Assassin on Killing Lincoln

DWIGHT JON ZIMMERMAN has written extensively on military-history subjects for American Heritage, the Naval Institute Press, Vietnam Magazine, and numerous military-themed publications. His books include The Hammer and the Anvil and The Vietnam War: A Graphic History. He lives in Brooklyn, New York.
Loading...
or
Not Currently Available for Direct Purchase