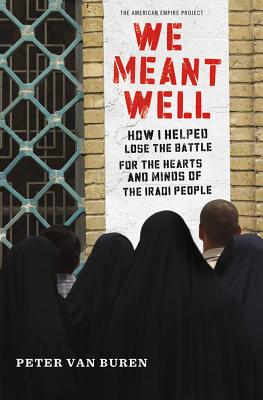 "One diplomat's darkly humorous and ultimately scathing assault on just about everything the military and State Department have done—or tried to do—since the invasion of Iraq. The title says it all."—The New York Times

A work of "scathing, gallows humor" (The Boston Globe), We Meant Well is a tragicomic voyage of ineptitude and corruption that leaves its writer—and readers—appalled and disillusioned, but wiser.

Charged with rebuilding Iraq, would you spend taxpayer money on a sports mural in Baghdad's most dangerous neighborhood to promote reconciliation through art? How about an isolated milk factory that cannot get its milk to market? Or a pastry class training women to open cafés on bombed-out streets that lack water and electricity?

As Peter Van Buren shows, we bought all these projects and more in the most expensive hearts-and-minds campaign since the Marshall Plan. We Meant Well is his eyewitness account of the civilian side of the surge—that surreal and bollixed attempt to defeat terrorism and win over Iraqis by reconstructing the world we had just destroyed. Leading a State Department Provincial Reconstruction Team on its quixotic mission, Van Buren details, with laser-like irony, his yearlong encounter with pointless projects, bureaucratic fumbling, overwhelmed soldiers, and oblivious administrators secluded in the world's largest embassy, who fail to realize that you can't rebuild a country without first picking up the trash.


Praise For We Meant Well: How I Helped Lose the Battle for the Hearts and Minds of the Iraqi People (American Empire Project)…

“One diplomat's darkly humorous and ultimately scathing assault on just about everything the military and the State Department have done -- or tried to do -- since the invasion of Iraq. The title says it all.” —Steven Myers, New York Times

“In this shocking and darkly hilarious exposé of the reconstruction of post-Saddam Iraq, former State Department team leader Van Buren describes the tragicomedy that has been American efforts at nation building, marked by bizarre decisions and wrongheaded priorities… "We made things in Iraq look the way we wanted them to look," Van Buren writes. With lyrical prose and biting wit, this book reveals the devastating arrogance of imperial ambition and folly.” —Publishers Weekly (Starred Review)

“One of the rare, completely satisfying results of the expensive debacle in Iraq.” —Kirkus Reviews (Starred Review)

“I've read just about every memoir out of Iraq and Afghanistan in the last decade, military or otherwise, and this stands as one of the best -- certainly one of the most self-aware and best written.” —Washingtonian

“Long after the self-serving memoirs of people named Bush, Rice, and Rumsfeld are consigned to some landfill, this unsparing and very funny chronicle will remain on the short list of books essential to understanding America's Iraq War. Here is nation-building as it looks from the inside--waste, folly, and sheer silliness included.” —Andrew J. Bacevich, author of Washington Rules: America's Path to Permanent War

“The road to Hell is paved with taxpayer dollars in Peter Van Buren's account of a misspent year rebuilding Iraq. Abrasive, honest and funny, We Meant Well is an insider's account of life behind blast walls at the height of the surge.” —Nathan Hodge, author of Armed Humanitarians: The Rise of the Nation Builders

“If Joseph Heller's war began in 2004 instead of 1944, this would be the book entitled Catch-22. Once I picked up We Meant Well: How I Helped Lose the Battle for the Hearts and Minds of the Iraqi People (available September 27), I could not put the book down. I could not believe so much that appears to be fictional satire could instead relate actual events...Very highly recommended.” —Seattle-Post Intelligencer

“We Meant Well is a must-read, first-hand account of our disastrous occupation of Iraq. Its lively writing style will appeal to a wide audience.” —Ron Paul, M.D., Member of Congress

Peter Van Buren has served with the Foreign Service for over 23 years. He received a Meritorious Honor Award for assistance to Americans following the Hanshin earthquake in Kobe, a Superior Honor Award for helping an American rape victim in Japan, and another award for work in the tsunami relief efforts in Thailand. Previous assignments include Taiwan, Japan, Korea, the UK and Hong Kong. He volunteered for Iraq service and was assigned to ePRT duty 2009-10. His tour extended past the withdrawal of the last combat troops.

Van Buren worked extensively with the military while overseeing evacuation planning in Japan and Korea. This experience included multiple field exercises, plus civil-military work in Seoul, Tokyo, Hawaii, and Sydney with allies from the UK, Australia, and elsewhere. The Marine Corps selected Van Buren to travel to Camp Lejeune in 2006 to participate in a field exercise that included simulated Iraqi conditions. Van Buren spent a year on the Hill in the Department of State’s Congressional Liaison Office.

Van Buren speaks Japanese, Chinese Mandarin, and some Korean. Born in New York City, he lives in Virginia with his spouse, two daughters, and a docile Rottweiler. We Meant Well is his first book.