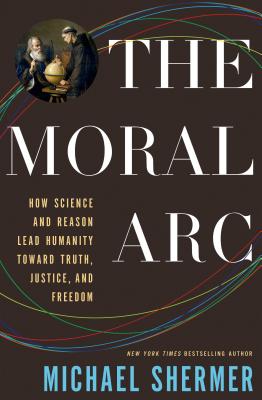 How Science Makes Us Better People

Bestselling author Michael Shermer's exploration of science and morality that demonstrates how the scientific way of thinking has made people, and society as a whole, more moral

From Galileo and Newton to Thomas Hobbes and Martin Luther King, Jr., thinkers throughout history have consciously employed scientific techniques to better understand the non-physical world. The Age of Reason and the Enlightenment led theorists to apply scientific reasoning to the non-scientific disciplines of politics, economics, and moral philosophy. Instead of relying on the woodcuts of dissected bodies in old medical texts, physicians opened bodies themselves to see what was there; instead of divining truth through the authority of an ancient holy book or philosophical treatise, people began to explore the book of nature for themselves through travel and exploration; instead of the supernatural belief in the divine right of kings, people employed a natural belief in the right of democracy.

In The Moral Arc, Shermer will explain how abstract reasoning, rationality, empiricism, skepticism--scientific ways of thinking--have profoundly changed the way we perceive morality and, indeed, move us ever closer to a more just world.


Praise For The Moral Arc: How Science Makes Us Better People…

“This is one of the best recent books that I have read, and it's the one that I expect to re-read most often. It's an honest, clear account of morality and justice that makes those theoretical concepts come alive as ubiquitous real-life choices. In the process of reading it, you'll learn about wrenching moral dilemmas such as paying ransoms to Somali pirates, maintaining nuclear weapons as deterrents, good people becoming Nazis, and the immorality of the Bible and of the Ten Commandments.” —Jared Diamond, Pulitzer-prize-winning author of the best-selling books Guns, Germs, and Steel, Collapse, and The World until Yesterday

“I suspect that people will be arguing with Michael Shermer's premise before they read a page: ‘The moral arc is bending toward truth, justice, and freedom? Is he hallucinating? Just look at...' In these cynical times, where right and left foresee disaster and despair (albeit for different reasons), Shermer's monumental opus, spanning centuries, nations, and cultures, is bound to provoke debate and open minds. Exactly what an important work of skepticism, science, and reason should do.” —Carol Tavris, Ph.D., social psychologist and author of The Mismeasure of Woman and coauthor of Mistakes Were Made (But Not by Me)

“A thrilling and fascinating book, which could change your view of human history and human destiny. If you wanted a sequel to The Better Angels of Our Nature, one which explored all of our spheres of moral progress, not just the decline of violence, this is it.” —Steven Pinker, Johnstone Professor of Psychology at Harvard University and author of The Blank Slate and The Sense of Style: The Thinking Person's Guide to Writing in the 21st Century

“It is difficult to imagine how the arc of morality can bend toward justice without rational examination of the consequences of one's actions. As Michael Shermer passionately describes in this ambitious, thoroughly researched, yet remarkably accessible work of scholarship, the fabric of modern morality derives not from religion, but in large part from secular notions of rational empiricism. This message needs to be shared more broadly for the good our society, and hopefully this book will do just that.” —Lawrence M. Krauss, Foundation Professor and Director of the Origins Project at Arizona State University, and bestselling author of A Universe from Nothing and The Physics of Star Trek

“Michael Shermer makes the astonishing claim that science, precisely because of its rational, dispassionate, and enlightened attitude towards revealing the truth, has helped to lay the moral groundwork for modern society, pointing the way to a more just and moral world. Instead of being a passive observer to the dance of history and the evolution of ethics, Shermer makes the outrageous claim that science has in fact been one of the principle actors. Bravo, I say.” —Michio Kaku, theoretical physicist, author of the best seller The Future of the Mind, and Physics of the Future

“Michael Shermer argues that science, reason, and critical thinking come first; these are the ideas that produce stable, peaceful democracies. He documents and assesses society's successes and failures through the troubled history of humankind--and he's relentless. He connects the arc of the rise of reason and science with a country's economic success, and the overall worldwide decline in violence and suppression of our fellow humans, especially women. If you are religious, have a look. Shermer takes your faith to task and celebrates science as a path to the better moral future that citizens everywhere long for.” —Bill Nye, The Science Guy, CEO, The Planetary Society

“The Moral Arc displays the impressive depth of Michael Shermer's scholarship, wisdom and empathetic humanity, and it climaxes in a visionary flight of futuristic optimism. A memorable book, a book to recommend and discuss late into the night.” —Richard Dawkins, author of The Selfish Gene and The God Delusion

“Michael Shermer is a beacon of reason in an ocean of irrationality.” —Neil deGrasse Tyson

Michael Shermer is the author of The Moral Arc, Why People Believe Weird Things, The Believing Brain, and several other books on the evolution of human beliefs and behavior. He is the founding publisher of Skeptic magazine, the editor of Skeptic.com, a monthly columnist for Scientific American, and Presidential Fellow at Chapman University. He lives in Southern California.
Loading...
or
Not Currently Available for Direct Purchase