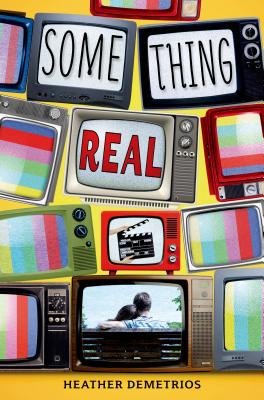 Seventeen-year-old Bonnie™ Baker has grown up on TV—she and her twelve siblings are the stars of one-time hit reality show Baker's Dozen. Since the show's cancellation, Bonnie™ has tried to live a normal life, under the radar and out of the spotlight. But it's about to fall apart . . . because Baker's Dozen is going back on the air. Bonnie™'s mom and the show's producers won't let her quit and soon the life that she has so carefully built for herself, with real friends (and maybe even a real boyfriend), is in danger of being destroyed by the show. Bonnie™ needs to do something drastic if her life is ever going to be her own—even if it means being more exposed than ever before.


Praise For Something Real…

“Given the oversaturation of reality television and the strength of the celebrity gossip industrial complex, Demetrios's addictive yet thoughtful debut, about a teenage TV star in search of normalcy, comes as a welcome reprieve.” —Publishers Weekly

“This chilling satire follows one teenager's efforts to escape from the reality TV franchise financially supporting her large family. . . Sobering and thought-provoking ideas wrapped in an engaging plot.” —Kirkus Reviews

“With likable protagonists and snappy dialogue, Something Real credibly zooms in on reality TV's impact on unwilling subjects–a shoo-in for teens drawn to contemporary romance and drama.” —School Library Journal

Heather Demetrios is the author of several critically acclaimed novels including Something Real and I'll Meet You There. She is a recipient of the PEN New England Susan P. Bloom Discovery Award and has an MFA in Writing for Children and Young Adults from Vermont College of Fine Arts. When she isn’t traipsing around the world or spending time in imaginary places, she lives with her husband in North Carolina.
Loading...
or
Not Currently Available for Direct Purchase