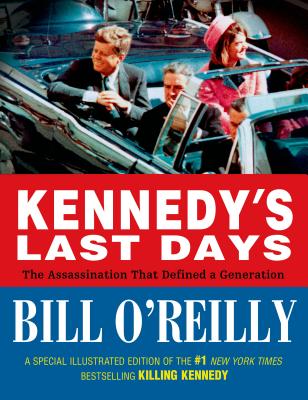 On a sunny day in Dallas, Texas, at the end of a campaign trip, President John Fitzgerald Kennedy is assassinated by an angry, lonely drifter named Lee Harvey Oswald. The former Marine Corps sharpshooter escapes briefly, but is hunted down, captured, and then shot dead while in police custody.

Kennedy's Last Days is a gripping account of the events leading up to the most notorious crime of the twentieth century. Author Bill O'Reilly vividly describes the Kennedy family's life in the public eye, the crises facing the president around the world and at home, the nation's growing fascination with their vigorous, youthful president, and finally, the shocking events leading up to his demise.

Adapted from Bill O'Reilly's best-selling historical thriller Killing Kennedy, with an unforgettable cast of characters, page-turning action, and art on every spread, Kennedy's Last Days is history that reads like a thriller. This exciting book will captivate adults and young readers alike.

BILL O’REILLY’s success in broadcasting and publishing is unmatched. He was the iconic anchor of The O'Reilly Factor, the highest-rated cable news broadcast in the nation for 16 consecutive years. His website BillOReilly.com is followed by millions all over the world, his No Spin News is broadcast weekday nights at 8 and 11 (ET) on The First TV, and his O’Reilly Update is heard weekdays on more than 225 radio stations across the country. He has authored an astonishing fifteen #1 bestsellers; his historical Killing series is the bestselling nonfiction series of all time, with nearly 18 million books in print. O’Reilly has received a number of journalism accolades, including three Emmys and two Emmy nominations. He holds a History degree from Marist College, a master's degree in Broadcast Journalism from Boston University, and a master’s degree from Harvard’s John F. Kennedy School of Government. O’Reilly lives on Long Island where he was raised. His philanthropic enterprises have raised tens of millions for people in need and wounded American veterans.
Loading...
or
Not Currently Available for Direct Purchase