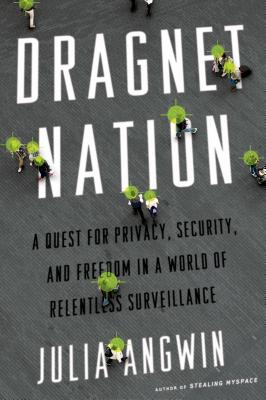 A Quest for Privacy, Security, and Freedom in a World of Relentless Surveillance

An inside look at who's watching you, what they know and why it matters. We are being watched.

We see online ads from websites we've visited, long after we've moved on to other interests. Our smartphones and cars transmit our location, enabling us to know what's in the neighborhood but also enabling others to track us. And the federal government, we recently learned, has been conducting a massive data-gathering surveillance operation across the Internet and on our phone lines.

In Dragnet Nation, award-winning investigative journalist Julia Angwin reports from the front lines of America's surveillance economy, offering a revelatory and unsettling look at how the government, private companies, and even criminals use technology to indiscriminately sweep up vast amounts of our personal data. In a world where we can be watched in our own homes, where we can no longer keep secrets, and where we can be impersonated, financially manipulated, or even placed in a police lineup, Angwin argues that the greatest long-term danger is that we start to internalize the surveillance and censor our words and thoughts, until we lose the very freedom that makes us unique individuals. Appalled at such a prospect, Angwin conducts a series of experiments to try to protect herself, ranging from quitting Google to carrying a "burner" phone, showing how difficult it is for an average citizen to resist the dragnets' reach.

Her book is a cautionary tale for all of us, with profound implications for our values, our society, and our very selves.


Praise For Dragnet Nation: A Quest for Privacy, Security, and Freedom in a World of Relentless Surveillance…

“Welcome to life in a society of ubiquitous surveillance, tracking and data mining... Angwin, a Wall Street Journal reporter who along with her colleagues has produced essential reporting on privacy and security … aims to illuminate the costs of living with systems that track nearly everything we do, think or say… [and] she performs a herculean effort to regain her privacy… A useful, well-reported study.” —The Los Angeles Times

“I read Julia Angwin's new book Dragnet Nation… I heartily recommend it to you… [The book is an] antidote to Big Brother's big chill.” —Bill Moyers

“A deeply researched book that is completely of the moment. Dragnet Nation moves right to the top of the list of books we should all read about privacy.” —Salon

“Angwin's warning that ‘information is power' resonates.” —The Daily Beast

“Angwin elegantly chronicles this tragedy of the digital commons at the level of policy and our individual civil liberties…Dragnet Nation really kicks in--and becomes a blast to read--when she fights back…If enough people follow Angwin's lead, new networks of computer users might manage to open up ever larger holes in the dragnet world.” —Bookforum

“Angwin, a longtime reporter on digital privacy issues for the Wall Street Journal, releases the contemporary (and, unfortunately, nonfiction) companion book to Orwell's 1984. Dragnet Nation examines the surveillance economy and its effect on free speech and thought, likely causing readers to rethink the next words they type into a search engine.” —LA Weekly

“Informative, conversational… [Angwin's] travails educate her (and her readers) about all the ways privacy-minded developers are working to develop anti-surveillance tools, and this forms a helpful guide for readers seeking non-jargony information on minimizing their digital footprints.” —Columbia Journalism Review

“A new hot-button issue that touches both politics and business is privacy, and the erosion of privacy is examined in Dragnet Nation.” —Publishers Weekly (Top 10 Business & Economics Books)

“Fascinating ... Angwin, who spent years covering privacy issues for the Wall Street Journal, draws on conversations with researchers, hackers and IT experts, surveying the modern dragnet tracking made possible by massive computing power, smaller devices and cheap storage of data...A solid work for both privacy freaks and anyone seeking tips on such matters as how to strengthen passwords.” —Kirkus Reviews

“In this thought-provoking, highly accessible exploration of the issues around personal data-gathering, Julia Angwin provides a startling account of how we're all being tracked, watched, studied, and sorted. Her own (often very funny) attempts to maintain her online privacy demonstrate the ubiquity of the dragnet--and the near impossibility of evading it. I'll never use Google in the same way again.” —Gretchen Rubin, bestselling author of Happier at Home and The Happiness Project

“Julia Angwin's pathbreaking reporting for the Wall Street Journal about online tracking changed the privacy debate. Her new book represents another leap forward: by showing how difficult it was to protect her own privacy and vividly describing the social and personal costs, Angwin offers both a wakeup call and a thoughtful manifesto for reform. This is a meticulously documented and gripping narrative about why privacy matters and what we can do about it.” —Jeffrey Rosen, president and CEO, National Constitution Center, and author of The Unwanted Gaze and The Naked Crowd

“Dragnet Nation is an impressive picture of the new world of electronic surveillance -- from Google to the NSA. Julia Angwin's command of the technology is sure, her writing is clear, and her arguments are compelling. This is an authoritative account of why we should care about privacy and how we can protect ourselves.” —Bruce Schneier, author of Liars and Outliers: Enabling the Trust That Society Needs to Thrive

“Dragnet Nation is a fascinating, compelling, and powerful read. Many of us would simply prefer not to know how much others know about us, and yet Julia Angwin opens a door onto that dark world in a way that both raises a new set of public issues and canvasses a range of solutions. We can reclaim our privacy while still enjoying the benefits of many types of surveillance – but only if we take our heads out of the sand and read this book.” —Anne-Marie Slaughter, president and CEO, New America

Julia Angwin is the author of Stealing MySpace and an award-winning investigative journalist for the independent news organization ProPublica. From 2000 to 2013 she was a staff reporter for The Wall Street Journal, where she was on the team of reporters awarded the 2003 Pulitzer Prize for coverage of corporate corruption and led a team covering online privacy that was a finalist for a 2012 Pulitzer Prize. She lives in New York City with her husband and two children.