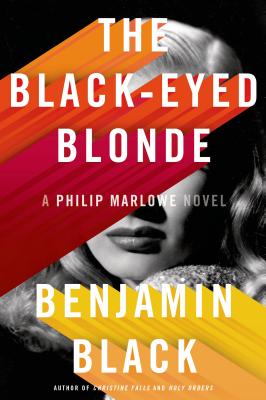 “In well-written noir, each sentence feels like a story unto itself and strung together those sentences form a book that feels somehow 'more' than any other out there. The Black-Eyed Blonde is such a book. Black manages to mimic the style of one of the best-known authors of the 20th century while still keeping a distinct voice. Raymond Chandler fans will be happy to see Phillip Marlowe back roaming the mean streets of L.A. There's a sultry femme fatale, a sinister philanthropist, and plenty of punches thrown, pistols whipped, and suits ruined. The Black-Eyed Blonde is a tall drink of whiskey, and I enjoyed every drop!”
— Lauren Peugh, Changing Hands Bookstore, Tempe, AZ
View the List

Raymond Chandler's incomparable private eye is back, pulled by a seductive young heiress into the most difficult and dangerous case of his career

"It was one of those summer Tuesday afternoons when you begin to wonder if the earth has stopped revolving. The telephone on my desk had the look of something that knows it's being watched. Traffic trickled by in the street below, and there were a few pedestrians, too, men in hats going nowhere."

So begins The Black-Eyed Blonde, a new novel featuring Philip Marlowe—yes, that Philip Marlowe. Channeling Raymond Chandler, Benjamin Black has brought Marlowe back to life for a new adventure on the mean streets of Bay City, California. It is the early 1950s, Marlowe is as restless and lonely as ever, and business is a little slow. Then a new client is shown in: young, beautiful, and expensively dressed, she wants Marlowe to find her former lover, a man named Nico Peterson. Marlowe sets off on his search, but almost immediately discovers that Peterson's disappearance is merely the first in a series of bewildering events. Soon he is tangling with one of Bay City's richest families and developing a singular appreciation for how far they will go to protect their fortune.

Only Benjamin Black, a modern master of the genre, could write a new Philip Marlowe detective novel that has all the panache and charm of the originals while delivering a story that is as sharp and fresh as today's best crime fiction.

“A first-rate noir…. [Benjamin Black] does an uncannily good job of filling Marlowe's legendary gumshoes…. It's remarkable how fresh this book feels while still hewing close to the material on which it's based…. Mr. Black has…hit a bull's-eye.” —Janet Maslin, The New York Times

“[Black] has revived Chandler's legendary PI Philip Marlowe in a new adventure…. A perfume heiress hires the shamus to investigate the disappearance of her lover, and the mystery soon opens up under him like a sinkhole…. Black manages to nail not only Marlowe's voice, but his soul.” —Entertainment Weekly

“Terrific fun…The Black-Eyed Blonde could be passed off as a newly discovered Chandler manuscript found in some dusty La Jolla closet…. Any fan of Chandler's work is going to enjoy it.” —The New York Times Book Review

“Half the pleasure of this book, at least for a Chandler fan, is to notice Black getting the little things right…. Against a dozen other detective novels on my desk, I'll take a Raymond Chandler any day of the week, even when its written by somebody else--assuming that somebody is Benjamin Black.” —All Things Considered, NPR

“It's vintage L.A., toots: The hot summer, rain on the asphalt, the woman with the lipstick, cigarette ash and alienation, V8 coupes, tough guys, snub-nosed pistols, the ice melting in the bourbon… The results are Chandleresque, sure, but you can see Banville's sense of fun.” —The Washington Post

“I opened the book hopefully--and I closed it entirely satisfied, even thrilled…. It's all there, the Chandler voice: the crisply detailed description and sly similes that set a scene precisely, the world-weary bemusement of the narrator, his gimlet eye for the ladies and the delicately ominous foreshadowing…. It's clear Banville does love Marlowe, and he's reminded me why I love him, too.” —Tampa Bay Times

“From its pitch-perfect opening sentences, Benjamin Black's channeling of Raymond Chandler is one of the season's best mysteries.” —The San Francisco Chronicle

“I was impressed by the plotting of The Black-Eye Blonde, its perfect pacing and use of misdirection.... Banville nails the spoiled L.A. atmosphere that is Chandler's forte.” —Salon.com

“A tremendously fun and diverting tale…The author of a somber but beautifully written series of mysteries set in the same era as Chandler's novels, Black was a savvy choice for the job. His nimble plotting drives The Black-Eyed Blonde…Marlowe, however, remains the undisputed star of the show, a hardened, magnetic presence.” —Page Views, New York Daily News

“All of the essential ingredients are there, afloat in a tumbler of Santa Monica sleaze…. But Mr. Black can also make words do things Chandler could only dream of…. The fun lies in watching two styles tangle…. With an artfulness worthy of the original, Mr. Black has made it new, though he doesn't forget whom he owes.” —The New York Observer

“What Black captures in Chandler's voice is the weary twist of ambivalence…. That baseline of doubt, the whiff of regret and then betrayal, form the essential atmosphere of noir fiction. And Black gets that exactly right.” —The Oregonian

“Banville has largely perfected Chandler's much-mimicked, seldom-bettered knack for similes and one-liners…. Best of all, though, he conjures the world-weary loneliness of Chandler's creation, a character who, in just seven novels, the world saw far too little of. Banville/Black clearly loves writing this and the fun he's having – his affection for Chandler's world – shines through….Entirely irresistible.” —The Guardian (UK)

“[The Black-Eyed Blonde] is probably better than an actual Chandler: more coherent, and more consistent, more careful. Banville is simply a more elegant writer. Chandler was a metaphorical rogue trader; Banville is a class act.” —The New Statesman (UK)

“[The fact that] this novel is so enjoyable is a testament to the effectiveness of the formula that Chandler laboured so hard to perfect.” —The Telegraph (UK)

“Seen as a crime novel in its own right it is a cut above anything else out there.” —The Irish Times

“Black's Marlowe caper is in a separate league. It is wonderful, an affectionate tribute and a labour of love that is sure to please Chandler devotees and endear new audiences.” —The National (Abu Dhabi)

“[Banville] brings Raymond Chandler's Philip Marlowe back to full-blooded life--complete with inner turmoil and honest, hard-boiled dialogue. This is not a pastiche, but the real deal, kicked up a notch with clever traces of irony. It's tightly plotted, has its share of blunt violence and wise-cracks, as well as descriptions of L.A. that puncture the city's elaborate façade. Banville has been compared to Joyce, and this novel confirms the comparison. You'll find memorable passages that demand to be read aloud. [Banville's prose] captures perfectly the melancholy soul of Philip Marlowe.” —Zoom Street Magazine

“Despite Robert B. Parker's lengthy experience in the PI genre, his sequel to The Big Sleep, Perchance to Dream, pales in comparison with Black's pitch-perfect recreation of the character and his time and place. As for the language, Black nails Chandler's creative and memorable similes and metaphors.... While the mystery is well-plotted, Black elevates it beyond mere thoughtful homage with a plausible injection of emotion in his wounded lead.” —Publishers Weekly (boxed and starred review)

“[Black] offers a stylish homage to Raymond Chandler in this tightly written caper…. The focus…is on style and mood, and the Irishman, perhaps surprisingly, nails both. The homage game is a tricky game to play, but Black makes all the right moves. Great fun for Chandlerians.” —Booklist

“Black…deliver[s] a more complex and satisfying mystery than other authors have done in the past. This latest incarnation of Chandler's sleuth with appeal to fans of Chandler and Marlowe, but newcomers to one of the first great PIs in crime fiction will find much to enjoy here as well.” —Library Journal

“A treat for fans.” —Kirkus Reviews

“Somewhere Raymond Chandler is smiling, because this is a beautifully rendered hardboiled novel that echoes Chandler's melancholy at perfect pitch. The story is great, but what amazed me is how John Banville caught the cumulative effect Chandler's prose had on readers. It's hard to quantify, but it's also what separated the Marlowe novels from the general run of noir (which included some damn fine novelists, like David Goodis and Jim Thompson). The sadness runs deep. I loved this book. It was like having an old friend, one you assumed was dead, walk into the room. Kind of like Terry Lennox, hiding behind those drapes.” —Stephen King

“Banville channeling Chandler is irresistible--a double whammy of a mystery. Hard to think anyone could add to Chandler with profitable results. But Banville most definitely gets it done.” —Richard Ford

Benjamin Black is the pen name of the Man Booker Prize-winning novelist John Banville. The author of the bestselling and critically acclaimed series of Quirke novels—as well as The Black-Eyed Blonde, a Philip Marlowe novel—he lives in Dublin.