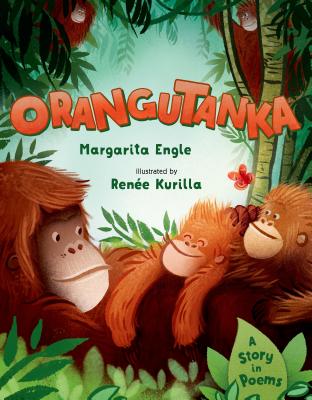 A Story in Poems

All the orangutans are ready for a nap in the sleepy depths of the afternoon . . . all except one. This little orangutan wants to dance! A hip-hop, cha-cha-cha dance full of somersaults and cartwheels. But who will dance with her?
Written in bold poems in the tanka style, an ancient Japanese form of poetry that is often used as a travel diary, this exuberant orangutan celebration from acclaimed poet Margarita Engle will make readers want to dance, too!


Praise For Orangutanka: A Story in Poems…

“A sprightly introduction to orangutans through nimble wordplay and attractive book design . . . This well-crafted book, with its accomplished verses and smattering of facts, should earn a wide audience.” —School Library Journal, Starred Review

“[A] warm, rewarding portrait of these intelligent apes.” —Publishers Weekly

“* Like the firefly light, Engle's poetry is a gossamer thread of subtle beauty weaving together three memorable characters who together find hope and courage. Another fine volume by a master of the novel in verse.” —Kirkus Reviews, starred review on The Firefly Letters

“Engle presents a delightful tale of five orangutans in a string of linked tankas, an ancient Japanese form of poetry . . . A playful and instructive introduction to a little-known form of verse.” —Kirkus Reviews

“Cleverly combining poetry with scientific information, Engle's modern tanka poems . . . express humor and energy. . . .The hilarious digitally colored pencil-and-ink illustrations depict the lush jungle environment and the furry orange orangutans' extended family at rest and play. Children will be inspired to move their arms and legs energetically like a happy orangutan, dancing the "Orangudance" to the music of the rain forest.” —Booklist

“* This book is an outstanding choice for young people of all reading skills.” —School Library Journal, starred review on Tropical Secrets

“* Readers will be caught by the compelling narrative voices.” —Booklist, starred review on The Surrender Tree

“* An absolutely lovely book . . . that should be read by young and old, black and white, Anglo and Latino.” —School Library Journal, starred review on The Poet Slave of Cuba

“* Readers will hear the stories--and never forget them.” —Booklist, starred review on The Poet Slave of Cuba

“* The moving poetry and finely crafted story will draw readers in and leave them in tears and in awe.” —The Bulletin of the Center for Children's Books, starred review on The Poet Slave of Cuba

Renée Kurilla has illustrated many books for children, none of which include this much fur. She, her husband, and their fluffy cat, Timmy, can be found in Boston, Massachusetts, approximately 9,410 miles from the Borneo rain forest.
Loading...
or
Not Currently Available for Direct Purchase