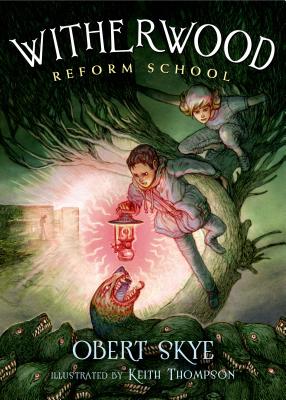 After a slight misunderstanding involving a horrible governess, oatmeal, and a jar of tadpoles, siblings Tobias and Charlotte Eggars find themselves abandoned by their father at the gates of a creepy reform school. Evil mysteries are afoot at Witherwood, where the grounds are patrolled by vicious creatures after dark and kids are locked in their rooms. Charlotte and Tobias soon realize that they are in terrible danger—especially because the head of Witherwood has perfected the art of mind control.

If only their amnesiac father would recover and remember that he has two missing children. If only Tobias and Charlotte could solve the dark mystery and free the kids at Witherwood—and ultimately save themselves.

Obert Skye is the author and illustrator of The Creature from My Closet: Wonkenstein. He has also written the bestselling children's fantasy adventure series Leven Thumps and Pillage.

Keith Thompson is a professional freelance artist whose work appears in movies, games and
books including the Witherwood Reform School series and the Leviathan trilogy by Scott
Westerfeld. Thompson lives in Ottawa, Ontario.

“Skye's old-fashioned, witty writing style and amusing humor is the perfect fit for fans of the Spiderwick Chronicles and A Series of Unfortunate Events series.” —Booklist

“A brother and sister find themselves trapped in a frightening school that threatens to destroy their minds in this dark comedy. . . Skye writes very much in the same vein as Lemony Snicket, with menacing dark humor and outlandish characters.” —Kirkus Reviews

“In this Snicketesque series opener, Skye crafts an imaginative, absorbing tale in which nothing is as it seems.” —Publishers Weekly

“Dark and funny . . . it will appeal to kids with a sharp sense of humor and a budding interest in Lemony Snicket.” —The Bulletin

“Quite funny and has a lot of laugh-out-loud moments. . . . The idea of a hybrid Willy Wonka/Frankenstein character is original and hilarious.” —School Library Journal on Wonkenstein

“Filled with spot-on commentary and a wince-inducing supporting cast, middle grade guys won't be able to keep Wonkenstein to themselves. . . . This pitch-perfect offering should appeal to reluctant readers, not to mention the legion Wimpy Kid fans.” —Shelf Awareness on Wonkenstein

“Skye captures all the silly action in the winning text-plus-cartoons format. . . . Rob's dry commentary on his family, school, and social life is sure to provoke laughs.” —Publishers Weekly on Potterwookiee