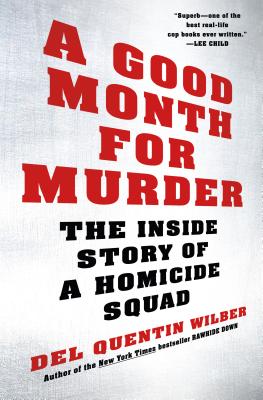 "The book is briskly paced.... Wilber, a former Washington Post reporter, is painstaking in tracing how the detectives go about their fieldwork. The cat-and-mouse games they play with suspects in the interrogation room are fascinating."—The Washington Post

“Excellent.... Mr. Wilber has a keen reporter’s eye and ear for detail and a deft pen that sometimes skewers with funny yet unstinting prose the very detectives who granted him entrée to their world…. Wilber gets high marks for placing readers smack inside the world of his characters?in the stuffy, fluorescent-lit homicide offices, the bloody murder scenes and the claustrophobic interview rooms as detectives cajole, intimidate and banter with witnesses.”—Pittsburgh Post-Gazette

"Wilber is a former veteran Baltimore Sun and Washington Post reporter who spent one cold February in 2013 tailing…this group of hardened but dedicated detectives, bent on justice but beset by impossible odds. It's like David Simon's The Wire—urgent but cold-eyed and tragic?and it's all true."—Men's Fitness

"Wilber chronicles twelve homicides that occurred during February 2013 [and] employs his considerable skills to tell the stories of those investigating these violent acts.... Wilber—who was given extraordinary access to interrogation rooms, crime scenes, and family homes—vividly depicts the tension, pressure and occasional tedium involved in crime-solving, portraying the work as both vital and unending."—The National Book Review

“[A] propulsive account of a hard-charging homicide unit in a high-crime Washington, D.C., suburb…. [Wilber’s] immersive approach allows him to capture the cops' inner monologues and their prickly exchanges with criminals and one another with effective clarity. Readable, appealing true crime with an undercurrent of unease at the violence creeping into so many postindustrial ‘edge city’ communities.” —Kirkus Reviews

“A rare snapshot of homicide investigation in action, from crime scenes through families’ homes, interrogation rooms, and squad rooms…. Wilber gives the kind of detail that can only be acquired through intensive interviewing and observation…. A fascinating report written in a relentless, real-life noir tone.” —Booklist (starred review)

“Highly recommended…. This book may remind listeners of David Simon’s television show Homicide in its quality, accessibility, and style; it could easily be included on lists of the best true crime books of the past 20 years.” —Library Journal

"Superb—one of the best real-life cop books ever written."—Lee Child

"With this engrossing and compelling account of the reality of crime and policing, Del Quentin Wilber affirms his place as one of the nation's most accomplished writers of first-rate narrative nonfiction. Put away your mysteries and thrillers—this is the real thing, rendered with grit and with grace."?Jon Meacham, author of American Lion and Destiny and Power

"This is the real cop story?not a TV show, not fiction, not a political diatribe. A Good Month for Murder is a deeply reported, compelling, timely account of what it's like to be a homicide detective working in the shadows of the nation's capital."—David Maraniss, author of Once in a Great City: A Detroit Story