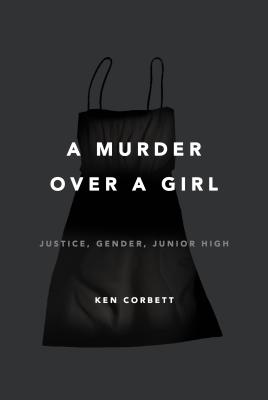 A Murder Over a Girl

A psychologist's gripping, troubling, and moving exploration of the brutal murder of a possibly transgender middle school student by an eighth grade classmate

On Feb. 12, 2008, at E. O. Green Junior High in Oxnard, CA, 14-year-old Brandon McInerney shot and killed his classmate, Larry King, who had recently begun to call himself "Leticia" and wear makeup and jewelry to school.

Profoundly shaken by the news, and unsettled by media coverage that sidestepped the issues of gender identity and of race integral to the case, psychologist Ken Corbett traveled to LA to attend the trial. As visions of victim and perpetrator were woven and unwoven in the theater of the courtroom, a haunting picture emerged not only of the two young teenagers, but also of spectators altered by an atrocity and of a community that had unwittingly gestated a murder. Drawing on firsthand observations, extensive interviews and research, as well as on his decades of academic work on gender and sexuality, Corbett holds each murky facet of this case up to the light, exploring the fault lines of memory and the lacunae of uncertainty behind facts. Deeply compassionate, and brimming with wit and acute insight, A Murder Over a Girl is a riveting and stranger-than-fiction drama of the human psyche.


Praise For A Murder Over a Girl: Justice, Gender, Junior High…

“…[A] searing and complicated inquiry into gender identity, class, and race in America.”—Booklist (starred review)

“What Corbett's introspective, even brooding account of this trial has to add, in our age of ever-escalating racial and gender and ethnic bias attacks, are some powerful insights into how hatred takes hold in the mind of a young person, and how we as a culture might reckon with its consequence . . . . Corbett's relentlessly open mind is rewarding . . . His compassion leads him to places he did not expect to go . . . . And he drives home some salient truths. . . . [He] surprises. . . . The tragedy . . . is that before the shots rang out that morning, practically everyone around them interpreted Larry's issues as a problem and Brandon's as just a boy thing. That pathology—our own pathology—continued through the trial. It continues now.”—The New York Times Book Review

“Corbett brings his best Truman Capote to bear on a 2008 school shooting in Oxnard, Calif. . . . [he] writes compellingly and . . . reveals the vagaries of the legal system and . . . of profoundly complex human interactions.”—The Washington Post

“[A Murder Over a Girl] is one of the best recent examples of the [true crime] genre because it focuses, with no small amount of empathy, on our tragic ignorances with regard to sexuality and gender. . . Ken Corbett . . . approaches his subject with shrewdness, diligence, and care . . . . Whether we call it true crime or not, the lessons of A Murder Over a Girl linger. . . You’ll want to read it again, though not because it is a gripping procedural. . . .You’ll read it again because it matters.”—Flavorwire

“This is a book that is difficult to read, and more difficult not to read.”—San Francisco Book Review (5/5 stars)

“A true crime fan’s must read. You may also want to share this book with parents you know.”—Washington Blade

“Profound and disturbing, this heartbreaking testimony of our culture’s worst fissures suggests that understanding is the only way to heal.”—Publishers Weekly (starred review)

“Corbett powerfully documents the life-threatening consequences of America's persistent fear of gender difference. This will be read by those with academic, political, and personal interest in making the world safer for LGBT youth.”—Library Journal

“The story of a murder, [Corbett] reflects, is not simply a recitation of facts or a pragmatic account of the living and the dead. . . . An emotionally resonant account of a real-life tragedy.”—Kirkus

“Harrowing, humane, and utterly engaging, A Murder Over a Girl is a triumph of storytelling, delivering deep insight into gender and adolescence while drawing us into a fascinating narrative. It is a book very much of the moment, but at its heart it is a classic tale of human emotion.”—Susan Orlean, New York Times bestselling author of The Orchid Thief

“Ken Corbett was put on earth to write this stunning book, now, at a moment in our history when we need him to be our secret agent, our witness, our guide inside the maelstrom of this mad hatter court.”—Peter Carey, Booker Prize-winning author of Oscar and Lucinda and The True History of the Kelly Gang

“With great compassion, insight, and care, Ken Corbett takes us to the scene in which one transgendered child’s daring and vibrant bid to become a girl met with the murderous rage of a boy well taught in using a gun. A murdered girl is gone, a nearly undocumented life, yet her spectre lives on in this remarkable book, a narration that enters us into the minds of those who make hatred into a form of pernicious reasoning. A Murder Over a Girl is about youth culture, gender, school, and the failures of the legal system, about cunning reversals in argument whereby murderers are cast as victims, and the traces of the dead are nearly effaced. Corbett does justice to this death and to this life with a book both intelligent and loving, exposing a world tragically lacking in those very qualities, calling upon us all to intervene to halt gender violence before it begins.”—Judith Butler, author of Gender Trouble

“A Murder Over a Girl narrates a searing tragedy, meticulously laying out the aftermath of the crime, exposing the pathos not only of the victim, but also of the classmates, parents, jurors, lawyers, and others who had to grapple with the troubling nuance of the case. And in doing so Corbett unforgettably reveals the flaws of the American judicial system, the destructive influence of sensationalizing mass media, and the blindness of good intentions at the intersection of masculinity, grief, prejudice, and empathy.”—Andrew Solomon, New York Times bestselling author of Far from the Tree

“I’ve never read a book like A Murder Over a Girl. It’s an account of a murder trial, the outcome of which is known; yet, the book is a hard-to-put-down page-turner. It achieves its extraordinary narrative intensity not through any sensationalizing of the facts, but rather through its author’s quiet authority, piercing insights, and his refusal to deliver hasty or easy judgments. Through patience, respect and empathy, Corbett allows us to see how dehumanization conceals a consequential and potentially fatal refusal to confront loss. And in confronting loss, this book renders justice, restoring to the memory of the victim her dignity, her vital subjectivity and her agency. A Murder Over A Girl is magnificently written, shattering, original and immensely valuable.”—Tony Kushner, Pulitzer Prize-winning author of Angels in America

“There are events that break out of a culture as illness breaks out of a body. Ken Corbett has written an account of a crime yes, a trial yes, a tragedy, but he has also perceived a way for us to comprehend the gender dis-ease just below our cultural skin. This is a brilliant and necessary book.”—Marie Howe, author of What the Living Do and The Kingdom of Ordinary Time

“One young teenager is dead. Another is a murderer. And all of our contemporary dividing lines—race, gender, class, orientation, homophobia, privilege, and fear of the unknown—are drawn in a California courtroom. Telling this devastating story with clarity, empathy, and insight, Ken Corbett brings his profound understanding of the minds of boys—their hopes, their dreams, their terrors, their longings—to bear in the service of making the unimaginable clear to us. This essential book will broaden your mind even as it breaks your heart.”—Mark Harris, author of Pictures at A Revolution and Five Came Back

“Ken Corbett corrals the chaos and trauma of the King murder trial into a riveting story of the “cratered minds” that result from, and perpetrate, violence. With an analyst’s attunement, he also takes us beyond the courtroom, imagining his way into the lives and minds of Brandon McInerney and Leticia King with nuance and tremendous compassion. He gives a devastating account of the emotional landscapes of the school, the families, and the communities in which both murderer and victim were and were not held. Corbett’s determination that this crime be named and these lives be told results in a powerful and heartbreaking book.”—Gayle Salamon, author of Assuming a Body: Transgender and Rhetorics of Materiality

Ken Corbett is Clinical Assistant Professor at the New York University Postdoctoral Program in Psychoanalysis and Psychotherapy. He maintains a private practice in New York City and consults internationally. His writings and interviews about gender, sexuality, art, and psychotherapy appear in academic journals as well as in magazines, newspapers, websites, and on television. He is the author of the critically acclaimed Boyhoods: Rethinking Masculinities.
Loading...
or
Not Currently Available for Direct Purchase