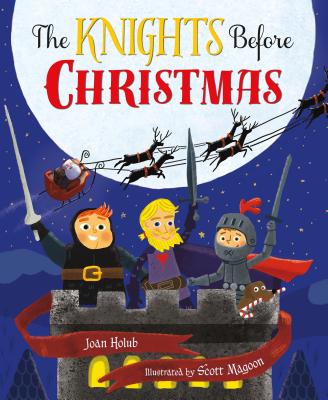 The Knights Before Christmas

A humorous retelling of the classic poem Twas the Night Before Christmas--with a medieval twist!

'Twas December 24th, and three brave knights were just settling in for the night when out on the drawbridge, there arose such a clatter! The knights try everything to get rid of this unknown invader (Santa Claus!), a red and white knight with a fleet of dragons . . .

But nothing would stop
their white-whiskered foe.
No matter their efforts,
he just would not go!

This parody of Clement Clarke Moore's well-known poem 'Twas the Night Before Christmas is kid-friendly, clever, and just plain silly—sure to become a holiday classic of a different kind.


Praise For The Knights Before Christmas…

“There's an excellent interplay between the amusing illustrations and the polished text, with lots of clever jokes for readers to discover in the art. These knights know how to keep the castle safe and the readers entertained” —Kirkus Reviews

“This story does for numbers what Laurie Keller did for states.” —Booklist on Zero the Hero by Joan Holub

“Read this aloud to whet the new reader's appetite, but there is just so much to see that only a slow reading, with a magnifying glass in hand, will do.” —The Horn Book Magazine on Zero the Hero by Joan Holub

“Entertaining and clever--and that's no lie.” —Kirkus Reviews on The Boy Who Cried Bigfoot by Scott Magoon

Joan Holub has authored and/or illustrated over 120 children's books, including Zero the Hero, Shampoodle and Groundhog Weather School. She lives in Raleigh, North Carolina.

While moonlighting as a designer at a major children's publishing house, Scott Magoon has illustrated many successful books including Spoon by Amy Krause Rosenthal, Ugly Fish, and Rabbit and Squirrel. He lives in the Boston area with his wife and two sons.
Loading...
or
Not Currently Available for Direct Purchase