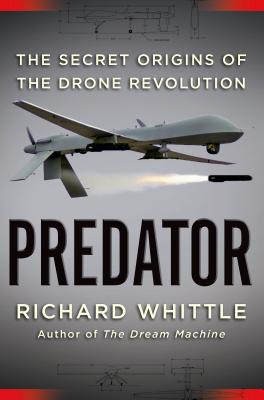 The Secret Origins of the Drone Revolution

The untold story of the birth of the Predator drone, a wonder weapon that transformed the American military, reshaped modern warfare, and sparked a revolution in aviation

The creation of the first weapon in history whose operators can stalk and kill an enemy on the other side of the globe was far more than clever engineering. As Richard Whittle shows in Predator, it was one of the most profound developments in the history of military and aerospace technology.

Once considered fragile toys, drones were long thought to be of limited utility. The Predator itself was resisted at nearly every turn by the military establishment, but a few iconoclasts refused to see this new technology smothered at birth. The remarkable cast of characters responsible for developing the Predator includes a former Israeli inventor who turned his Los Angeles garage into a drone laboratory, two billionaire brothers marketing a futuristic weapon to help combat Communism, a pair of fighter pilots willing to buck their white-scarf fraternity, a cunning Pentagon operator nicknamed "Snake," and a secretive Air Force organization known as Big Safari. When an Air Force team unleashed the first lethal drone strikes in 2001 for the CIA, the military's view of drones changed nearly overnight.

Based on five years of research and hundreds of interviews, Predator reveals the dramatic inside story of the creation of a revolutionary weapon that forever changed the way we wage war and opened the door to a new age in aviation.


Praise For Predator: The Secret Origins of the Drone Revolution…

“Fascinating…[Whittle] has combed every available document and talked to almost every American participant in drone research and development. The result is a soup-to-nuts--or ground-to-air--history of the world's most potent unmanned aerial vehicle, or UAV.” —The Wall Street Journal

“Fresh and authoritative … [Whittle] delivers action-packed details about how the CIA and the Pentagon used armed Predators to hunt for al-Qaeda leaders immediately after 9/11.” —The Washington Post

“[A] superbly researched, clearly written book.… [Predator is] important because it is about a flying machine … with consequences so enormous as to nearly defy everyday language.… Whittle is no unthinking patriot. He raises the questions that anybody who cares about the sacredness of human life ought to ask.” —The Dallas Morning News

“Superb… A lively, well-written genesis story … During five years of research and hundreds of interviews, Whittle unearthed a long list of revelations about the armed, remotely piloted aircraft…. And he adds scintillating details about its role in the hunt for top al-Qaeda leaders.” —San Diego Union-Tribune

“Predator … tells a dramatic story while impressively detailing the long and often-threatened creation of the armed drone that would revolutionize modern warfare.” —Daily News (New York)

“Read Predator for the fascinating story of how the unmanned aerial vehicle revolution came about.” —Foreign Policy

“Endlessly interesting and full of implication….There's plenty of geekery befitting a Tom Clancy novel to keep readers entertained… Whittle's account comes to a pointed conclusion: drone technology has already changed how we die, but what remains to be seen is how it ‘may change the way people live.'” —Kirkus Reviews (starred review)

“[The Predator's] history is longer, and more surprising, than most readers probably realize. Fascinating both as military history and as a look inside a hot contemporary social issue.” —Booklist

“Military and aviation aficionados will learn from and enjoy this in-depth work.” —Library Journal

“A brilliant and detailed account of the growing pains of the weapons system of the future. Whittle fully captures the political struggle that almost downed the nascent Predator program.” —Richard A. Clarke, former National Security Council counter-terrorism director and author of Against All Enemies

“Richard Whittle has delivered what will surely be the definitive history of how the United States came to arm its drones. Both deeply reported and very well written, Predator joins a very short list of books about the future of warfare that will engage any audience, from the specialist to the general reader.” —Peter Bergen, author of Manhunt: The Ten-Year Search for Bin Laden from 9/11 to Abbottabad

“Predator is a must-read. Love it or hate it, the armed drone represented a transformation??in military technology. Like every revolution, this one had a colorful cast of characters, and Whittle tells their story with the insight and authority of a veteran military journalist, drawing on inside sources in the Air Force, the CIA and defense industry. This book should be on the shelf of anyone who wants to understand military power in the 21st century.” —David Ignatius, columnist for The Washington Post and author of The Director

“All future attempts to understand the how and why of the drone era's beginnings, and the crucial personalities, disagreements, and decisions that shaped this technology, will be built on Richard Whittle's authoritative and original account. Predator tells the story of the real people whose insights, biases, and experience changed the realities of modern warfare.” —James Fallows, national correspondent for The Atlantic Monthly and author of National Defense

Richard Whittle is author of The Dream Machine: The Untold History of the Notorious V-22 Osprey. A Global Fellow at the Woodrow Wilson Center and 2013-14 Verville Fellow at the National Air and Space Museum, Whittle has covered the military for three decades, including twenty-two years as Pentagon correspondent for The Dallas Morning News. He lives in Chevy Chase, Maryland.