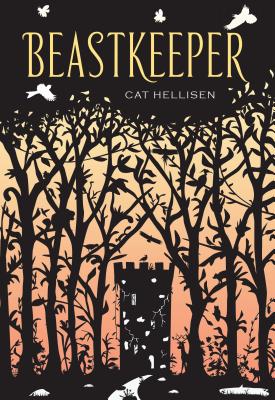 Sarah has always been on the move. Her mother hates the cold, so every few months her parents pack their bags and drag her off after the sun. She's grown up lonely and longing for magic. She doesn't know that it's magic her parents are running from.

When Sarah's mother walks out on their family, all the strange old magic they have tried to hide from comes rising into their mundane world. Her father begins to change into something wild and beastly, but before his transformation is complete, he takes Sarah to her grandparents—people she has never met, didn't even know were still alive.

Deep in the forest, in a crumbling ruin of a castle, Sarah begins to untangle the layers of curses affecting her family bloodlines, until she discovers that the curse has carried over to her, too. The day she falls in love for the first time, Sarah will transform into a beast . . . unless she can figure out a way to break the curse forever.

“Beastkeeper is a bright, beautiful sliver of a novel . . . Every page shimmers with magic.” —VOYA, STARRED REVIEW

“*An intense look at the seeds of rebellion and the individual consequences they sometimes reap.” —BCCB, starred review on When the Sea Is Rising Red

“Hellisen's first novel combines the survival tactics of Suzanne Collins' Hunger Games books with a fascinating array of magical creatures and powers.” —Booklist on When the Sea Is Rising Red

“Hellisen's captivating debut will haunt readers.” —School Library Journal on When the Sea Is Rising Red

“Hellisen creates an interesting world where magic and superstition rule.” —VOYA on When the Sea Is Rising Red

“The worldbuilding intrigues, and the open-ended conclusion begs a sequel.” —Kirkus Reviews on When the Sea Is Rising Red

Cat Hellisen lives in Cape Town, South Africa. She is also the author of When the Sea Is Rising Red.
Loading...
or
Not Currently Available for Direct Purchase