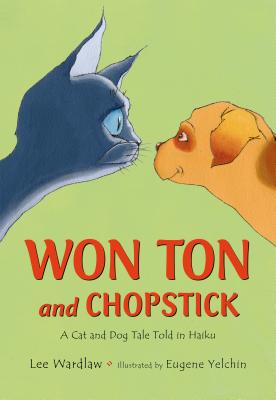 A Cat and Dog Tale Told in Haiku

Won Ton has a happy life with his Boy, until…

A new puppy arrives, and nothing will be the same.
Told entirely in haiku and with plenty of catitude, the story of how Won Ton faces down the enemy is a fresh and funny twist on a familiar rivalry.

Eugene Yelchin is the author and illustrator of The Haunting of Falcon House, Arcady's Goal, and the Newbery Honor Book Breaking Stalin's Nose. He has also illustrated several books for children, including Crybaby, Who Ate All the Cookie Dough?, and Won Ton. He lives in California with his wife and children.

Praise For Won Ton and Chopstick: A Cat and Dog Tale Told in Haiku…

“Young readers who fell in love with Won Ton in Wardlaw and Yelchin's first book, Won Ton: A Cat Tale Told in Haiku, will enthusiastically welcome this new adventure, and those not yet familiar with the earlier book will likely seek it out.” —Booklist

“In this charming sequel, a new puppy threatens the titular feline's idyllic experience in an enjoyable spin on the "adjusting to new baby" theme.” —School Library Journal

“Each haiku is complete in itself, capturing the essence of cat...and together the poems create a whole tale of displacement and eventual mutual understanding.” —The Horn Book

“* Will steal the hearts of readers young and old.” —School Library Journal, starred review on Won Ton: A Cat Tale Told in Haiku

“* [A] celebration of the child-pet bond.” —Booklist, starred review on Won Ton: A Cat Tale Told in Haiku