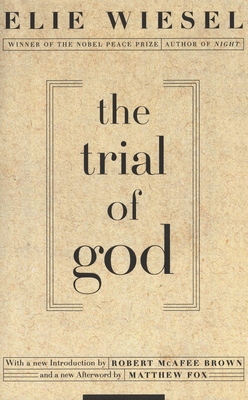 The Trial of God

The Trial of God (as it was held on February 25, 1649, in Shamgorod)
A Play by Elie Wiesel
Translated by Marion Wiesel
Introduction by Robert McAfee Brown
Afterword by Matthew Fox

Where is God when innocent human beings suffer? This drama lays bare the most vexing questions confronting the moral imagination.

Set in a Ukranian village in the year 1649, this haunting play takes place in the aftermath of a pogrom. Only two Jews, Berish the innkeeper and his daughter Hannah, have survived the brutal Cossack raids. When three itinerant actors arrive in town to perform a Purim play, Berish demands that they stage a mock trial of God instead, indicting Him for His silence in the face of evil. Berish, a latter-day Job, is ready to take on the role of prosecutor. But who will defend God? A mysterious stranger named Sam, who seems oddly familiar to everyone present, shows up just in time to volunteer.

The idea for this play came from an event that Elie Wiesel witnessed as a boy in Auschwitz: “Three rabbis—all erudite and pious men—decided one evening to indict God for allowing His children to be massacred. I remember: I was there, and I felt like crying. But there nobody cried.”

Inspired and challenged by this play, Christian theologians Robert McAfee Brown and Matthew Fox, in a new Introduction and Afterword, join Elie Wiesel in the search for faith in a world where God is silent.

“From the abyss of the death camps he has come as a messenger to mankind—not with a message of hate and revenge, but with one of brotherhood and atonement.”
—From the Citation for the 1986 Nobel Peace Prize

“Wiesel uses words to craft literary monuments, works that stand as acts of remembrance and as meditations on the nature of remembrance itself.”
—San Francisco Chronicle

“Unquestionably, Wiesel is one of the most admirable, indeed indispensable, human beings now writing.”
—Washington Post

“Not since Albert Camus has there been such an eloquent spokesman for man.”
—The New York Review of Books

ELIE WIESEL was awarded the Nobel Peace Prize in 1986. The author of more than fifty internationally acclaimed works of fiction and nonfiction, he was Andrew W. Mellon Professor in the Humanities and University Professor at Boston University for forty years. Wiesel died in 2016.
Loading...
or support indie stores by buying on