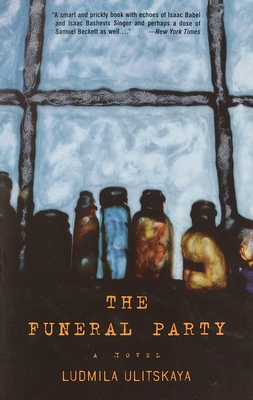 August 1991. In a sweltering New York City apartment, a group of Russian émigrés gathers round the deathbed of an artist named Alik, a charismatic character beloved by them all, especially the women who take turns nursing him as he fades from this world. Their reminiscences of the dying man and of their lives in Russia are punctuated by debates and squabbles: Whom did Alik love most? Should he be baptized before he dies, as his alcoholic wife, Nina, desperately wishes, or be reconciled to the faith of his birth by a rabbi who happens to be on hand? And what will be the meaning for them of the Yeltsin putsch, which is happening across the world in their long-lost Moscow but also right before their eyes on CNN?

This marvelous group of individuals inhabits the first novel by Ludmila Ulitskaya to be published in English, a book that was shortlisted for the Russian Booker Prize and has been praised wherever translated editions have appeared. Simultaneously funny and sad, lyrical in its Russian sorrow and devastatingly keen in its observation of character, The Funeral Party introduces to our shores a wonderful writer who captures, wryly and tenderly, our complex thoughts and emotions confronting life and death, love and loss, homeland and exile.

Ludmila Ulitskaya was born in Russia and was trained as a geneticist. Her novels and short stories have been published in Russia, France, Germany, and elsewhere; The Funeral Party is her American debut. She lives in Moscow.

Praise For The Funeral Party: A Novel…

"Ludmila Ulitskaya arrives here not just as a shrewd novelist, but as a wise and evocative artist. . . . [THE FUNERAL PARTY is] quickly paced, quirkily observed and full of delicate surprises."
—Carlin Romano in the Philadelphia Inquirer, 3/4/01
or support indie stores by buying on
Copyright © 2020 American Booksellers Association