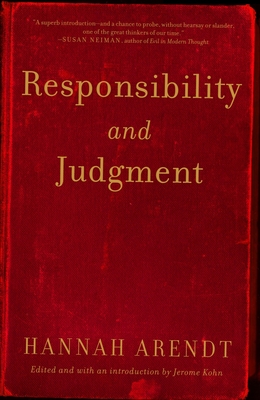 Responsibility and Judgment gathers together unpublished writings from the last decade of Arendt’s life, where she addresses fundamental questions and concerns about the nature of evil and the making of moral choices. At the heart of the book is a profound ethical investigation, “Some Questions of Moral Philosophy,” in which Arendt confronts the inadequacy of traditional moral “truths” as standards to judge what we are capable of doing and examines anew our ability to distinguish good from evil and right from wrong. We also see how Arendt comes to understand that alongside the radical evil she had addressed in earlier analyses of totalitarianism, there exists a more pernicious evil, independent of political ideology, whose execution is limitless when the perpetrator feels no remorse and can forget his acts as soon as they are committed.

Responsibility and Judgment is an indispensable investigation into some of the most troubling and important issues of our time.

Praise For Responsibility and Judgment…

“With Eichmann in Jerusalem Hannah Arendt wrote the 20th century's most important - and controversial - work on the problem of evil, and the least understood. The publication of Responsibility and Judgment is thus a particularly welcome event. For readers who know Arendt, the autobiographical reflections or the discussions of personal responsibility under dictatorship will be of great interest in understanding the background of Eichmann in Jerusalem or The Life of the Mind. For readers who don't, essays such as "Auschwitz on Trial" will provide a superb introduction to her views - and a chance to probe, without hearsay or slander, one of the great thinkers of our time.”
-- Susan Neiman, author of Evil in Modern Thought: An Alternative History of Modern Philosophy

Hannah Arendt was born in Hanover, Germany, in 1906, fled to Paris in 1933, and came to the United States after the outbreak of World War II. She was editorial director of Schocken Books from 1946 to 1948. She taught at Berkeley, Princeton, the University of Chicago, and The New School for Social Research. Arendt died in 1975.
Loading...
or support indie stores by buying on