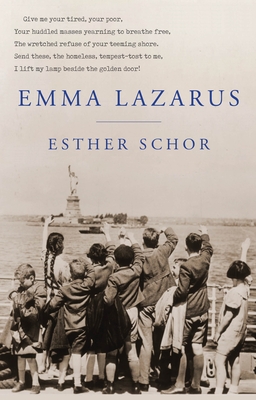 Emma Lazarus’s most famous poem gave a voice to the Statue of Liberty, but her remarkable story has remained a mystery until now. Drawing upon a cache of personal letters undiscovered until the 1980s, Esther Schor brings this vital woman to life in all her complexity—as a feminist, a Zionist, and a trailblazing Jewish-American writer. Schor argues persuasively for Lazarus’s place in history as an activist and a prophet of the world we all inhabit today. As a stunning rebuke to fear, xenophobia, and isolationism, Lazarus's life and work are more relevant now than ever before.

ESTHER SCHOR, a poet and professor of English at Princeton University, is the author of Bridge of Words: Esperanto and the Dream of a Universal Language, Strange Nursery: New and Selected Poems, My Last JDate, and Bearing the Dead: The British Culture of Mourning from the Enlightenment to Victoria. Her essays and reviews have appeared in The Times Literary Supplement, The New York Times Book Review, The New Republic, and The Forward.
Loading...
or
Not Currently Available for Direct Purchase