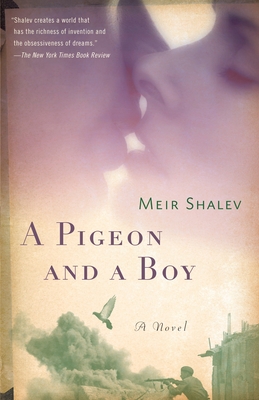 A Pigeon and a Boy (Paperback)

A mesmerizing novel of two love stories, separated by half a century but connected by one enchanting act of devotion—from the internationally acclaimed Israeli writer Meir Shalev.

During the 1948 War of Independence—a time when pigeons are still used to deliver battlefield messages—a gifted young pigeon handler is mortally wounded. In the moments before his death, he dispatches one last pigeon. The bird is carrying his extraordinary gift to the girl he has loved since adolescence. Intertwined with this story is the contemporary tale of Yair Mendelsohn, who has his own legacy from the 1948 war. Yair is a tour guide specializing in bird-watching trips who, in middle age, falls in love again with a childhood girlfriend. His growing passion for her, along with a gift from his mother on her deathbed, becomes the key to a life he thought no longer possible.

Unforgettable in both its particulars and its sweep, A Pigeon and A Boy is a tale of lovers then and now—of how deeply we love, of what home is, and why we, like pigeons trained to fly in one direction only, must eventually return to it.  In a voice that is at once playful, wise, and altogether beguiling, Meir Shalev tells a story as universal as war and as intimate as a winged declaration of love.

Meir Shalev was born in 1948 on Nahalal, Israel’s first moshav, and is one of Israel’s most celebrated novelists. His books have been translated into more than twenty languages and have been best sellers in Israel, Holland, and Germany. In 1999 the author was awarded the Juliet Club Prize (Italy). He has also received the Prime Minister’s Prize (Israel), the Chiavari (Italy), the Entomological Prize (Israel), the WIZO Prize (France, Israel, and Italy), and for A Pigeon and a Boy, the Brenner Prize, Israel’s highest literary recognition. A columnist for the Israeli daily Yedioth Ahronoth, Shalev lives in Jerusalem and in northern Israel with his wife and children.

Evan Fallenberg (www.evanfallenberg.com) translates fiction by well-known and upcoming Israeli writers. He teaches creative writing at Bar Ilan University in Israel and is the author of Light Fell, a novel.

Praise For A Pigeon and a Boy: A Novel…

"Shalev creates a world that has the richness of invention and the obsessiveness of dreams."
—The New York Times Book Review

"Shalev has deftly layered Yair's story in such a manner that a refreshingly nuanced picture of Israel emerges."
—The Miami Herald

"Vivid characters and sharp dialogue... By working stories in the past and present against each other, Shalev brings into questions the validity, and the reliability, of memory."
—The New York Times Book Review

"In homing pigeons, Shalev has found a motif that is replete with symbolism and scriptural allusion that he uses expertly, with maximum layered effect."
—Ottawa Citizen

"Brilliant... Universal in its scope and examination of human longing for a sense of roosting."
—The Jerusalem Post

"An exquisite creation, a work of quiet language tat needs no shouting to attain its impact."
—Chicago Jewish Star

"Stunning... This gem of a story about the power of love, which won Israel's Brenner Prize, brims with luminous originality."
—Publishers Weekly (starred review)
or support indie stores by buying on
Copyright © 2020 American Booksellers Association