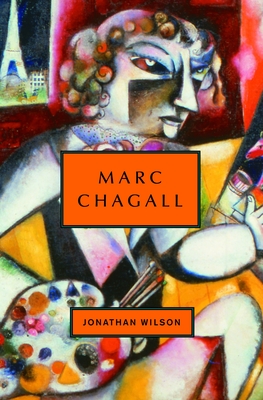 Novelist and critic Jonathan Wilson clears away the sentimental mists surrounding an artist whose career spanned two world wars, the Russian Revolution, the Holocaust, and the birth of the State of Israel. Marc Chagall’s work addresses these transforming events, but his ambivalence about his role as a Jewish artist adds an intriguing wrinkle to common assumptions about his life. Drawn to sacred subject matter, Chagall remains defiantly secular in outlook; determined to “narrate” the miraculous and tragic events of the Jewish past, he frequently chooses Jesus as a symbol of martyrdom and sacrifice.

Wilson brilliantly demonstrates how Marc Chagall’s life constitutes a grand canvas on which much of twentieth-century Jewish history is vividly portrayed. Chagall left Belorussia for Paris in 1910, at the dawn of modernism, looking back dreamily on the world he abandoned. After his marriage to Bella Rosenfeld in 1915, he moved to Petrograd, but eventually returned to Paris after a stint as a Soviet commissar for art. Fleeing Paris steps ahead of the Nazis, Chagall arrived in New York in 1941. Drawn to Israel, but not enough to live there, Chagall grappled endlessly with both a nostalgic attachment to a vanished past and the magnetic pull of an uninhibited secular present.

Wilson’s portrait of Chagall is altogether more historical, more political, and edgier than conventional wisdom would have us believe–showing us how Chagall is the emblematic Jewish artist of the twentieth century.

Visit nextbook.org/chagall for a virtual museum of Chagall images.

“Like the best of historical fiction, Wilson’s story is placed in an imagined past, but it is really happening right now . . . You’re likely to stay up late reading.”
– The Washington Post Book World

“An engrossing, complex, and fearless tale of politics, arts, murder, sex, and history (personal and global).”
–Anita Diamant, author of The Red Tent

“A Palestine Affair evokes, quite tangibly, the days of the Mandate. This is a true and touching act of the imagination. The book’s very sexy, a nostalgic and provocative envisioning of that time. I recommend it highly.”
–David Mamet

“Worth reading? An Englishman might say: ‘Rather.’ An American would put it differently: ‘You bet it is!’ “
–Saul Bellow

Jonathan Wilson is the author of A Palestine Affair, The Hiding Room, Schoom, and An Ambulance Is on the Way: Stories of Men in Trouble; and of two critical studies of the fiction of Saul Bellow. His work has appeared in The New Yorker, The New York Times Magazine, and Best American Short Stories, among other publications. A professor of English at Tufts University, he lives with his family in Newton, Massachusetts.
Loading...
or
Not Currently Available for Direct Purchase