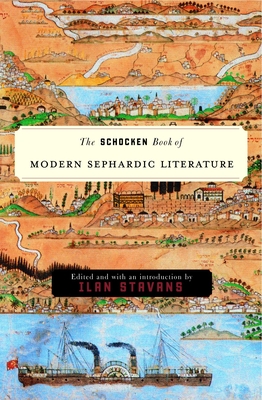 The expulsion of the Jews from Spain in 1492 gave rise to a series of rich, diverse diasporas that were interconnected through a common vision and joie de vivre. The exodus took these Sephardim to other European countries; to North Africa, Asia Minor, and South America; and, eventually, to the American colonies. In each community new literary and artistic forms grew out of the melding of their Judeo-Spanish legacy with the cultures of their host countries, and that process has continued to the present day. This multilingual tradition brought with it both opportunities and challenges that will resonate within any contemporary culture: the status of minorities within the larger society; the tension between a civil, democratic tradition and the anti-Semitism ready to undermine it; and the opposing forces of religion and secularism.

Ilan Stavans has been described by The Washington Post as “Latin America’s liveliest and boldest critic and most innovative cultural enthusiast.” And the Forward calls him “a maverick intellectual whose canonical work has already produced a whole array of marvels that are redefining Jewishness.” This new anthology contains fiction, memoirs, essays, and poetry from twenty-eight writers who span more than 150 years. Included are Emma Lazarus’s legendary poem “The New Colossus,” inscribed on the pedestal of the Statue of Liberty; the hypnotizing prose of Greece-born, Switzerland-based Albert Cohen; Nobel—Prize winner Elias Canetti’s ruminations on Europe before World War II; Albert Memmi’s identity quest as an Arab Jew in France; Primo Levi’s testimony on the Holocaust; and A. B. Yehoshua’s epic stories set in Israel today.

When read together, these explorations offer an astonishingly incisive collective portrait of the “other Jews,” Sephardim who long for la España perdida, their lost ancestral home, even as they create a vibrant, multifaceted literary tradition in exile.

Ilan Stavans is the Lewis-Sebring Professor of Latin American and Latino Culture at Amherst College. He lives in Amherst, Massachusetts.

Praise For The Schocken Book of Modern Sephardic Literature…

“A captivating portrait of the Sephardic experience in all its unity, dispersion, divided emotional sentiments, nostalgia and cultural identification. . . . A rich [and] unprecedented anthology.”
–Hadassah Magazine

“A welcome contribution . . . This collection is well-balanced, a warranted tribute to Sephardi writers.”
–Jerusalem Post

“Informative . . . An unusual anthology, well worth dipping into.”
–Kirkus

“Eloquent . . . This book is in its own way, as important as Irving Howe and Eliezer Greenberg’s groundbreaking ‘A Treasury of Yiddish Stories.’”
–Jewish News Weekly