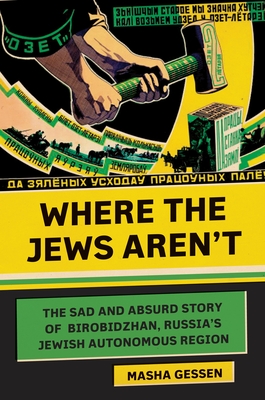 Where the Jews Aren't

From the acclaimed author of The Man Without a Face, the previously untold story of the Jews in twentieth-century Russia that reveals the complex, strange, and heart-wrenching truth behind the familiar narrative that begins with pogroms and ends with emigration.

In 1929, the Soviet government set aside a sparsely populated area in the Soviet Far East for settlement by Jews. The place was called Birobidzhan.The idea of an autonomous Jewish region was championed by Jewish Communists, Yiddishists, and intellectuals, who envisioned a haven of post-oppression Jewish culture. By the mid-1930s tens of thousands of Soviet Jews, as well as about a thousand Jews from abroad, had moved there. The state-building ended quickly, in the late 1930s, with arrests and purges instigated by Stalin. But after the Second World War, Birobidzhan received another influx of Jews—those who had been dispossessed by the war. In the late 1940s a second wave of arrests and imprisonments swept through the area, traumatizing Birobidzhan’s Jews into silence and effectively shutting down most of the Jewish cultural enterprises that had been created. Where the Jews Aren’t is a haunting account of the dream of Birobidzhan—and how it became the cracked and crooked mirror in which we can see the true story of the Jews in twentieth-century Russia.

(Part of the Jewish Encounters series)

Praise For Where the Jews Aren't: The Sad and Absurd Story of Birobidzhan, Russia's Jewish Autonomous Region (Jewish Encounters Series)…

“Gessen tells a poignant tale in Where the Jews Aren’t. The book’s most memorable sections are Gessen’s ruminations on homelessness as experienced by her own generation of Russian Jews, [which] helps her better appreciate the yearnings of the supporters of ‘perhaps the worst good idea ever.’ ” —Steven J. Zipperstein, The New York Times Book Review

“Gessen has the subtlety, honesty and tragic sensibility necessary to take a period and a society that are dripping in cruel irony, and to tell her stories with great affect, without being treacly or preachy.” —Haaretz

“Accessible….Gessen traces the grim story of Birobidzhan, a region in the desolate Soviet Far East where Jews were granted autonomy and an opportunity to escape their harsh existence of poverty, discrimination, terror, and ‘non belonging’ in Soviet Russia. The hopes were never realized, however, and the venture turned out to be a tale of ‘concentrated tragic absurdity’….Gessen ably tells one of the 20th century’s most chilling stories of struggle, perseverance, and despair.” —Publishers Weekly

“Moscow-born Gessen addresses the story of the Jewish struggle for autonomy in Stalin’s Russia. With no reason given, the Russian government decided that Jews, along with other ethnic groups like the Koreans, should be granted their freedom in an out-of-the-way spot along the Chinese border. Birobidzhan was one of the world’s two Jewish states, a place with a Yiddish language newspaper but no Yiddish-speaking residents. As the author tells of the formation of the settlement in 1934, she describes life as a Russian Jew. Even though she left when she was 12, Gessen ably explores the mindset of those before her who lived through the time….Though the narrative offers a depressing picture of Russian Jews, it is packed with wonderful stories of strength, intelligence, and impressive perseverance.” —Kirkus

“Throughout this concise and engaging book, Gessen strives to offer the story of Birobidzhan as idea, location, and experience…. Gessen’s winding journey toward seeing herself as part of a people who were and are offers the reader a rich primary source about a still ongoing process of post-Soviet Jews gaining awareness of the Soviet Jewish experience.” —The Forward

“This brief though complex book provides an illuminating chronicle of an under-examined area of 20th-century Jewish history.” —Library Journal

MASHA GESSEN’s previous books include The Brothers: The Road to an American Tragedy and the national best seller The Man Without a Face: The Unlikely Rise of Vladimir Putin. She has immigrated to the United States twice—once, as a teenager, from the Soviet Union and again, more than thirty years later, from Putin’s Russia. She lives in New York City.