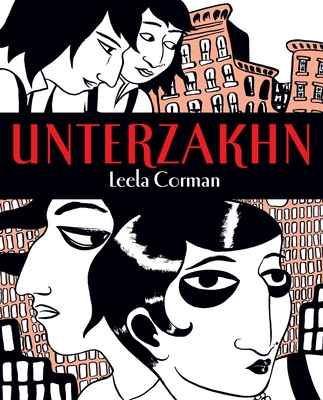 A mesmerizing, heartbreaking graphic novel of immigrant life on New York’s Lower East Side at the turn of the twentieth century, as seen through the eyes of twin sisters whose lives take radically and tragically different paths.

For six-year-old Esther and Fanya, the teeming streets of New York’s Lower East Side circa 1910 are both a fascinating playground and a place where life’s lessons are learned quickly and often cruelly. In drawings that capture both the tumult and the telling details of that street life, Unterzakhn (Yiddish for “Underthings”) tells the story of these sisters: as wide-eyed little girls absorbing the sights and sounds of a neighborhood of struggling immigrants; as teenagers taking their own tentative steps into the wider world (Esther working for a woman who runs both a burlesque theater and a whorehouse, Fanya for an obstetrician who also performs illegal abortions); and, finally, as adults battling for their own piece of the “golden land,” where the difference between just barely surviving and triumphantly succeeding involves, for each of them, painful decisions that will have unavoidably tragic repercussions.

“[A] touching look at twins who take distinctly different roads in life, but can't prevent their paths from intersecting . . .  Corman’s style, inspired by Russian folk art, has a crudeness that highlights the gritty urban environment, but the fluid line-work of her characters adds a touch of delicacy and grace to the proceedings.”
—NPR.org

“A haunting and often heartbreaking look at Eastern European Jewish immigrants in the early 20th century, Unterzakhn is also a story about women, power, and bodies; entirely too much of it rings entirely too contemporary . . . Corman blends an almost wobbly, liquid style with a real sense of period detail and a flair for the grotesque. She also knows what comics can do well, and one of those things is move forward and backward in time, giving a 200-page narrative the feel of a tightly told epic.”
—Austin American-Statesman

“Corman’s attention to period detail and the quirks of Yiddish bring this book to vivid life . . . While she allows for a lot of moral ambiguity in the conventional sense, there seems to be no question which characters are the most humane. The complex route she takes to guide the reader to arrive at these conclusions, the level of detail she includes, and the feelings that the journey evinces are what make this a successful work. [Unterzakhn is] a celebration of human kindness in the face of the abyss . . .”
—The Comics Journal

“Corman’s writing and artwork make for a very energetic combination. Her brushwork is as bold as her sharp narrative. Her vision works well with expressing women’s issues, the Jewish struggle, tenement life, and the dreams of her characters, whether thwarted or painfully realized . . . [A] sumptuous graphic novel.”
—Comics Grinder

“Here is what is magisterial about Unterzakhn: it arrives with the force of artistic conviction, the unholy love child of Love and Rockets and Isaac Bashevis Singer . . . It is a credit to Corman that you will not forget the outcome of these girls’ lives—a story simple and fabulistic, as in the best of Singer, with dark overtones that come from faithless characters in whom we can trust.”
—Edie Meidav, The Millions

“Corman’s comic is filled with colorful characters, each lovingly, dramatically rendered in a loose, abstracted style of exaggerated design that belies the complexity of the fully-realized sets and setting they move through. These include not only the sisters, their mother and father, the women who shaped them, and the men who flit in and out of their lives, but even the minor players, the people crowding the backgrounds of street scenes. Viewed as either a story or as art, it’s an exceptional piece of work. Viewed as story as art, it’s a tour-de-force.”
—Robot6

“Lures you in with wittiness and sensuality . . . then bites you in the tuchus!  Unterzakhn swirls with the energy of Almodóvar and the depth of Dostoyevsky as it follows the fates of two charmingly complicated twin sisters.  I loved it.”
—Craig Thompson, author of Habibi

“An incredible book about twin sisters growing up on New York’s Lower East Side in the early twentieth century. It’s about the experience and struggles of women, the immigrant experience, and it’s just brimming with life. . . . Wow.”
—ComicBookResources.com

“Unterzakhn works on multiple levels (one notable one: the art work is fantastic, particularly when Corman infuses any of her female characters with a snarl or a sneer, conveying a lifetime of pent-up emotion in a single panel), and as such, it’s highly recommended.”
—GraphicNovelReporter.com

“Corman’s caricatures are striking and distinctive, making the exaggerated characters come alive, and she provides a great, detailed view of the times. . . . She does an excellent job of dropping the reader into this particular time and place. Although a period piece, the underlying concerns, especially those related to a woman’s control of her own body, remain particularly timely.”
—ComicsWorthReading.com

“In the footsteps of Art Spiegelman comes Leela Corman.  Like the renowned creator of Maus, she employs the graphic novel form, but rather than address the Holocaust she is addressing the Jewish immigrant experience on the Lower East Side in the early twentieth century.”
—The Jewish Week (New York)

“Corman produces an exceptional portrayal, deserving of much laudatory praise and acclaim, of immigrant and Jewish life on par with the works of Will Eisner and Art Spiegelman.”
—SFSite.com

“Corman has an ear for dialogue and a loose, curvilinear brush-line that makes reading her work a pleasure.”
—The Boston Phoenix

“Captivating. . . . A sweetly sad story, illustrating the difficulty of life in the early twentieth century as seen through the eye of a specific subculture. . . . Corman never shies away from harshness in either her story or her illustrations, but she handles it with grace. Unterzakhn is a quick read, but a meaningful one.”
—Baltimore City Paper

“Historically informed and aesthetically compelling . . . Heavily inked cartoons beautifully depict period details and the Hester Street gossips as times evolve, and show how the two sisters’ similarities change into stark differences in appearance as they age.  The text, salted with Yiddish, and the eloquently detailed images meld together to make this a good choice for readers who enjoyed Eleanor Widmer’s Up from Orchard Street or Hubert and Kerascoet’s Miss Don’t Touch Me.”
—Booklist

“Set in New York’s Lower East Side in the early twentieth century, Unterzakhn follows the lives of two sisters, Fanya and Esther . . . Corman gracefully traces both young women’s efforts to maintain control of their bodies in an unpredictable and at times violent world. She steeps her striking black-and-white artwork with period details, particularly in the clothes and the bustling street scenes.  In a flashback scene set in Russia, especially, she echoes the swirling evocative style of Russian folk art . . . The story of Fanya and Esther’s struggles is beautifully drawn and hard to forget.”
—Publishers Weekly

LEELA CORMAN has illustrated books on subjects ranging from urban gardening to the history of the skirt, and her work has also appeared in The New York Times, on WNET/Thirteen, and in The Boston Phoenix, Lilith, Bust, and Tikkun. She studied painting, printmaking, and illustration at Massachusetts College of Art. Leela is also a professional belly dancer. Her radio show, "Ecstacy to Frenzy" airs weekly on GROWRadio. She lives in Florida.