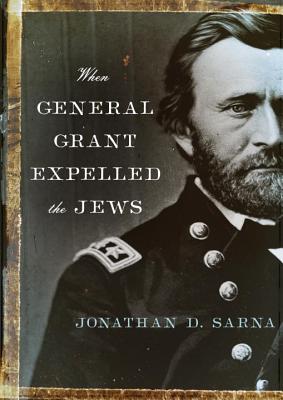 When General Grant Expelled the Jews

Finalist, 2012 National Jewish Book Awards
A riveting account of General Ulysses S. Grant's decision, in the middle of the Civil War, to order the expulsion of all Jews from the territory under his command, and the reverberations of that decision on Grant's political career, on the nascent American Jewish community, and on the American political process.
On December 17, 1862, just weeks before Abraham Lincoln announced the Emancipation Proclamation, General Grant issued what remains the most notorious anti-Jewish order by a government official in American history. His attempt to eliminate black marketeers by targeting for expulsion all Jews as a class unleashed a firestorm of controversy that made newspaper headlines and terrified and enraged the approximately 150,000 Jews then living in the United States, who feared the importation of European antisemitism onto American soil.
Although the order was quickly rescinded by a horrified Abraham Lincoln, the scandal came back to haunt Grant when he ran for president in 1868. Never before had Jews become an issue in a presidential contest, and never before had they been confronted so publicly with the question of how to balance their American and Jewish interests. Award-winning historian Jonathan D. Sarna gives us the first complete account of this little-known episode including Grant's subsequent apology, his groundbreaking appointment of Jews to prominent positions in his administration, and his unprecedented visit to the land of Israel. Sarna sheds new light on one of our most enigmatic presidents, on the Jews of his day, and on the ongoing debate between group loyalty and national loyalty that continues to roil American political and social discourse.
JEWISH ENCOUNTERS SERIES.

Praise For When General Grant Expelled the Jews…

“Engaging and splendidly researched . . . A compelling, even inspiring tale of redemption. Sarna’s fine work is a heartening reminder that even politicians are sometimes touched by the better angels of their nature, and it is a welcome revision to the 18th president’s place in American and Jewish history.”
—Commentary

“Sarna’s remarkably illuminating little gem of a book also reminds us that being Jewish in America has always been a complex psychological negotiation. His new book examines this phenomenon while closely studying a little-known slice of early American Jewish history that will both amaze and distress readers.”
—Jerusalem Post Magazine

“This provocative new book is exactly what it sounds like:  an account of how Gen. Ulysses S. Grant issued an order to expel Jews from their homes in the midst of the Civil War.  Anyone seeking to rock the Passover Seder with political debate will find the perfect conversation piece in Sarna’s account of this startling American story. . . .  His book is part of the prestigious [Jewish Encounters] series, matching prominent Jewish writers with intriguingly fine-tuned topics.”
—Janet Maslin, The New York Times

“Powerful . . . Sarna’s brilliantly nuanced exploration of the worst official anti-Semitic incident in American history offers us a clear reminder in these ideologically fraught days of why keeping up a firm wall between church and state remains a core defense for all of our freedoms. This wide-ranging and judiciously balanced book is the latest entry in the luminous Schocken/Nextbook Jewish Encounters series of books [that] thoughtfully pair a great writer and an important facet of Jewish life.”
—Marc Wortman, The Daily Beast

“An interesting history about a little-discussed event during the Civil War.”
—St. Louis Post-Dispatch

“Sarna’s book is going to make a significant splash amidst a wave of new books reevaluating the career of one of our most famous army general/presidents . . . Most compelling.”
—John Marszalek, Moment magazine

“An excellent study [from the] gifted and resourceful historian Jonathan D. Sarna . . . His account shines brightest around the edges of the story, offering valuable new insights into ethnic politics, press power, and the onetime ability of leaders to flip-flop with grace . . . A compelling page-turner.”
—Harold Holzer, The Washington Post

“Thoroughly researched and crisply written, this is a very fine work that will interest students of both American and modern Jewish history.”
—Publishers Weekly

“Sarna expertly navigates the repercussions of Grant’s shocking order, which galvanized the American Jewish community into action, reminding many who were refugees from European expulsions how insecure they were even in America. . . . Sarna weighs the short-lived order against important Jewish appointments in Grant’s administration, his humanitarian support for oppressed Jews around the world, and lasting friendships with  Jews.  A well-argued exoneration of a president and a sturdy scholarly study.”
—Kirkus Reviews

“In this compelling and focused study, Jonathan D. Sarna explores the causes—and assesses the little-known impact—of one of the most troubling incidents in the life of the Union's greatest commander.”
—Geoffrey C. Ward, coauthor of The Civil War

“An absorbing account of a lamentable act by the North’s greatest  general, a dishonorable act committed by an honorable man. This fair and balanced treatment of the event places the commander and the Jews in the context of great conflict. Fortunately, redemption and rapprochement would follow.”
—Frank J. Williams, president, Ulysses S. Grant Association

Jonathan D. Sarnais the Joseph H. and Belle R. Braun Professor of American Jewish History at Brandeis University and chief historian of the National Museum of American Jewish History. He has written, edited, or co-edited more than twenty books and is best known for the acclaimed" American Judaism: A History," which received the Jewish Book Council s Everett Family Foundation Jewish Book of the Year Award in 2004. He lives in Massachusetts.

The PBS documentary "Jewish Soldiers in Blue & Gray," which features Jonathan Sarna, explores the hidden stories of American Jews during the Civil War. Presented by the Shapell Manuscript Foundation, it isavailable for purchase on DVD at www.shapell.org."
Loading...
or
Not Currently Available for Direct Purchase