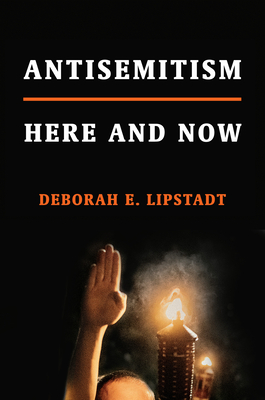 The award-winning author of The Eichmann Trial and Denial: Holocaust History on Trial gives us a penetrating and provocative analysis of the hate that will not die, focusing on its current, virulent incarnations on both the political right and left: from white supremacist demonstrators in Charlottesville, Virginia, to mainstream enablers of antisemitism such as Donald Trump and Jeremy Corbyn, to a gay pride march in Chicago that expelled a group of women for carrying a Star of David banner.

Over the last decade there has been a noticeable uptick in antisemitic rhetoric and incidents by left-wing groups targeting Jewish students and Jewish organizations on American college campuses. And the reemergence of the white nationalist movement in America, complete with Nazi slogans and imagery, has been reminiscent of the horrific fascist displays of the 1930s. Throughout Europe, Jews have been attacked by terrorists, and some have been murdered.

Where is all this hatred coming from? Is there any significant difference between left-wing and right-wing antisemitism? What role has the anti-Zionist movement played? And what can be done to combat the latest manifestations of an ancient hatred? In a series of letters to an imagined college student and imagined colleague, both of whom are perplexed by this resurgence, acclaimed historian Deborah Lipstadt gives us her own superbly reasoned, brilliantly argued, and certain to be controversial responses to these troubling questions.

Praise For Antisemitism: Here and Now…

“Lipstadt’s book [is] crucial for understanding the dismaying resurgence of antisemitism—on both the right and the left.” —Randy Rosenthal, The Washington Post

“Lipstadt aims not to break new scholarly ground but to awaken her audience to the nature, persistence and scale of the threat, along with the insidious ways in which it seeks to disguise itself.  She succeeds . . . She has written a book that combines erudition, clarity, accessibility and passion at a moment when they could not be needed more.” —Bret Stephens, The New York Times Book Review

“A valuable book . . . Lipstadt shows good judgment, always erring on the side of moderation, her attacks more deadly because they are not indiscriminate . . . It makes for a very readable account and, like the author, it’s gutsy.” —Daniel Finkelstein, The Times (London)

“This is not an academic history of antisemitism. It’s something more valuable—an act of zooming in the moral lens on what is happening in the world today . . . Read Lipstadt’s new book. And then give it to your children and grandchildren. It is that good—and it is that relevant.” —Jeffrey Salkin, Religion News Service

“Deborah Lipstadt is that rare person, able to play a leading part in events and to fathom their meaning. Having triumphed in a court case brought by an antisemite, she now explains antisemitism to us and thus performs a double service. This a valuable book, containing many lessons.” —Anthony Julius, author of Trials of the Diaspora: A History of Anti-Semitism in England

“A leading scholar of Judaism explores just about every manifestation of contemporary antisemitism, with plenty of history included for context . . . A tour de force approachably presented.” —Kirkus Reviews

“Keeping her tone measured and carefully noninflammatory, Lipstadt presents an intelligent, evenhanded explanation of why Jews come under attack today. Informed, historically sound, and deeply rational, her book offers both convincing reasons for the recent rise of antisemitism and apt advice to ‘call out and combat’ it.” —Publishers Weekly

“Lipstadt’s method of Socratic dialogue allows her to write a number of enlightening essays on a wide range of historical aspects and current manifestations of antisemitism. This book is a must-read at a time of a mounting wave of aggressive nationalism and xenophobia in the world today.” —Jan T. Gross, author of Neighbors: The Destruction of the Jewish Community in Jedwabne, Poland

“To say anything worthwhile about antisemitism you need calm, lucidity, intelligence, and a faultless moral compass, all powered by a proper feeling for racial justice. Deborah Lipstadt has the entire skillset. That’s why her new book is so welcome, so necessary, and so clear.” —David Hare

“Antisemitism comes in different shades, all of them ugly—not least when it comes from those who regard themselves as champions of liberation. To fight this abomination in all its shades, Deborah Lipstadt has given us a sage, sober, and lucid manual for the perplexed and willfully blind. An outstandingly useful book.” —Todd Gitlin, author of The Sixties: Years of Hope, Days of Rage

DEBORAH E. LIPSTADT is Dorot Professor of Modern Jewish History and Holocaust Studies at Emory University. Her books include The Eichmann Trial, Denial: Holocaust History on Trial (a National Jewish Book Award winner), Denying the Holocaust: The Growing Assault on Truth and Memory, and Beyond Belief: The American Press and the Coming of the Holocaust, 1933-1945. She lives in Atlanta.

Antisemitism: Here and Now was awarded a National Jewish Book Award in 2019.
Loading...
or support indie stores by buying on
(This book is on backorder)