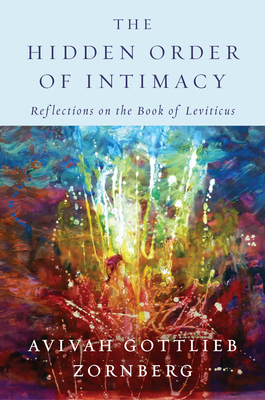 The Hidden Order of Intimacy

Reflections on the Book of Leviticus

A masterly analysis of the Book of Leviticus, the newest volume in the award-winning series of commentaries on the Hebrew Bible by “a celebrated biblical scholar, keen on weaving together traditional Jewish exegesis, psychoanalysis, and postmodern criticism” (The New York Times Book Review)

The image of the Golden Calf haunts the commentaries that thread through Leviticus. This catastrophic episode, in which the Israelites (freed from Egyptian slavery and forty days after their momentous encounter with God at Mount Sinai) worship a pagan idol while Moses is receiving the Torah from God on the mountaintop, gives the mostly legalistic text a unique depth and resonance. According to midrashic tradition, the post-traumatic effects of the sin of the Golden Calf linger through the generations, the sin to be “paid off” in small increments through time. Post-biblical perspectives view this as the diffusion of punishment, as well as a way of addressing the on-going phenomenon of idolatry itself.

These after-effects of the Golden Calf incident are imaginatively explored in Avivah Zornberg’s magnificent textual analysis. She brings the rabbis of the Talmud, medieval commentators, Hasidic scholars, philosophers, psychoanalysts, and literary masters—from Aristotle and Rashi to the Baal Shem Tov, Franz Rosenzweig, Sigmund Freud, and George Eliot—into her pathbreaking discussion of the nature of reward and punishment, good and evil, Eros and Thanatos, and humankind’s intricate and ever-fascinating encounter with the divine.

Praise For The Hidden Order of Intimacy: Reflections on the Book of Leviticus…

"Zornberg masterfully uncovers the subterranean threads and tension that underlie the written text of the myriad laws and rituals encompassed within the third book of the Bible . . . Although her thinking is complex, Zornberg's prose is fluid and poetic, enabling readers to follow her arguments with a sense of coherence and pleasure."
—Beth Kissileff, The Christian Century

“A new book by Avivah Gottlieb Zornberg is not just another work wrestling with the often obscure meanings of the Hebrew Bible. It is a seismic event. Her books—this latest is her sixth—are profound reflections."
—Mordechai Beck, The Jerusalem Report

“Zornberg follows her volumes on Genesis, Exodus, and Numbers with a stirring examination of Leviticus. Her nuanced interpretations reward close study, particularly her observation that ‘stumbling’ is essential to the process of understanding God’s words and that ‘failure is the process by which the Torah becomes real.’ This outstanding exegesis builds on its penetrating analysis of the Golden Calf and a surprising roster of sources—including Aristotle, George Eliot, and Sigmund Freud—to arrive at an original and persuasive take on Leviticus. Admirers of Karen Armstrong’s The Lost Art of Scripture will be richly rewarded.”
—Publishers Weekly, starred review