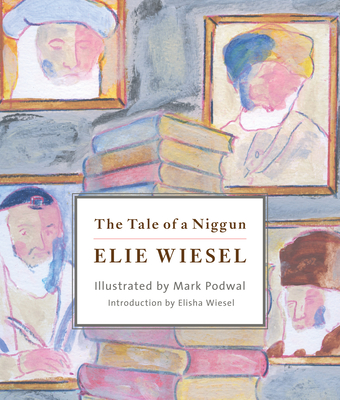 The Tale of a Niggun

Elie Wiesel’s heartbreaking narrative poem about history, immortality, and the power of song, accompanied by magnificent full-color illustrations by award-winning artist Mark Podwal. Based on an actual event that occurred during World War II.

It is the evening before the holiday of Purim, and the Nazis have given the ghetto’s leaders twenty-four hours to turn over ten Jews to be hanged to “avenge” the deaths of the ten sons of Haman, the villain of the Purim story, which celebrates the triumph of the Jews of Persia over potential genocide some 2,400 years ago. If the leaders refuse, the entire ghetto will be liquidated. Terrified, they go to the ghetto’s rabbi for advice; he tells them to return the next morning. Over the course of the night the rabbi calls up the spirits of legendary rabbis from centuries past for advice on what to do, but no one can give him a satisfactory answer. The eighteenth-century mystic and founder of Hasidism, the Baal Shem Tov, tries to intercede with God by singing a niggun—a wordless, joyful melody with the power to break the chains of evil.

The next evening, when no volunteers step forward, the ghetto’s residents are informed that in an hour they will all be killed. As the minutes tick by, the ghetto’s rabbi teaches his assembled community the song that the Baal Shem Tov had sung the night before. And then the voices of these men, women, and children soar to the heavens.

How can the heavens not hear?

Praise For The Tale of a Niggun…

“Accompanied by Mark Podwal's quietly haunting full-page illustrations, Elie Wiesel's spare language cuts to the heart of human loss, while the rhythms of the poetry capture the sad, endless march of inhumanity through history. At the same time, this poem sings out the power of belief and community and love.  A modest but affecting work with timeless relevance.”
—Kirkus Reviews

“The tale and its lesson are classically Wiesel. Human and beautiful, it empowers the powerless. It’s traditional for Jews to place stones on graves; this story, based on several examples from history, places a pebble on an already insurmountable pile of rocks.

"The Tale of a Niggun is, of course, a Jewish book, but also not a Jewish book. Jewish stories, even in the present tense, are ancient stories, and the question and lesson central to the book are as present now as they’ve been since Eve left Eden . . . Frequent Wiesel illustrator Mark Podwal’s watercolor paintings are lovely.”
—New York Journal of Books

The author of more than sixty works of fiction and nonfiction, ELIE WIESEL was awarded the United States Congressional Gold Medal, the Presidential Medal of Freedom, the French Legion of Honor's Grand Cross, an honorary knighthood of the British Empire and, in 1986, the Nobel Peace Prize. He was the Andrew W. Mellon Professor in the Humanities at Boston University for forty years, until his death in 2016.

MARK PODWAL has written and illustrated more than a dozen books, and has illustrated more than two dozen works by such authors as Elie Wiesel, Heinrich Heine, Harold Bloom, and Francine Prose. King Solomon and His Magic Ring, a collaboration with Wiesel, received the Silver Medal from the Society of Illustrators, and You Never Know, a collaboration with Prose, received a National Jewish Book Award. His art is represented in the collections of the Metropolitan Museum of Art, the Victoria and Albert Museum, Prague's National Gallery, and the Jewish museums in Berlin, Vienna, Prague, and New York, among other venues. Honors he has received include being named Officer of the Order of Arts and Letters by the French government, the Jewish Cultural Achievement Award from the Foundation for Jewish Culture, and the Gratias Agit Prize from the Czech Ministry of Foreign Affairs.
Loading...
or support indie stores by buying on