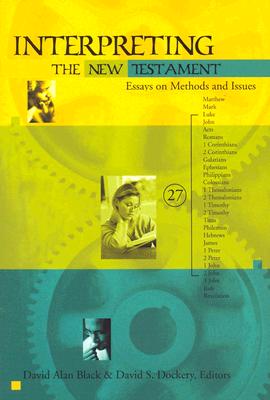 The editors of this book contend that one of the world's best-known and most influential bodies of literature is one of the least understood. This is due both to the proliferation of modern hermeneutical approaches and to the lack of understanding of the historical backgrounds of the New Testament. In their sequel to their earlier work, New Testament Criticism and Interpretation, Black and Dockery present essays on current issues and methods with the purpose of enhancing New Testament interpretation, teaching, and preaching, and providing a useful means of learning what the New Testament is all about.

David Alan Black is professor of New Testament and Greek at Southeastern Baptist Theological Seminary in Wake Forest, North Carolina. An avid horseman, he and his wife live on a 123-acre working farm in southern Virginia and are self-supporting missionaries to Mecklenburg County, Virginia, and Ethiopia.

David S. Dockery has been the president of Trinity International University in Deerfield, Illinois since 2014. Before coming to Trinity, Dockery served as president of Union University in Jackson, Tennessee for more than 18 years. He has also served as chairman of the board of the Council for Christian Colleges and Universities. Dockery has authored or edited thirty books including Renewing Minds, Shaping a Christian Worldview, and Christian Leadership Essentials.
Loading...
or
Not Currently Available for Direct Purchase