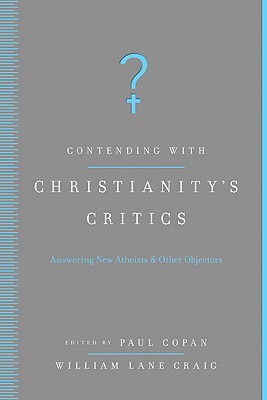 Anwering New Atheists and Other Objectors

Contending with Christianity’s Critics is book two in a series on modern Christian apologetics that began with the popular Passionate Conviction. This second installment, featuring writings from eighteen respected apologists such as Gary Habermas and Ben Witherington, addresses challenges from noted New Atheists like Richard Dawkins (The God Delusion) and other contemporary critics of Christianity concerning belief in God, the historical Jesus, and Christianity’s doctrinal coherence. Contending with Christianity's Critics and Passionate Conviction are the result of national apologetics conferences sponsored by the Evangelical Philosophical Society (www.epsociety.org).

Paul Copan is the Pledger Family Chair of Philosophy and Ethics at Palm Beach Atlantic University in West Palm Beach, Florida. He holds a Ph.D. in Philosophy from Marquette University.

William Lane Craig is research professor of Philosophy at Talbot School of Theology in La Mirada, California. His Ph.D. in Philosophy is from the University of Birmingham in the United Kingdom.