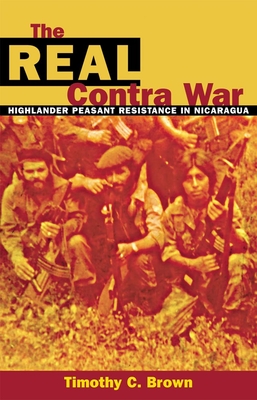 The Contra War and the Iran-Contra affair that shook the Reagan presidency were center stage on the U.S. political scene for nearly a decade. According to most observers, the main Contra army, or the Fuerza Democr tica Nicarag ense (FDN), was a mercenary force hired by the CIA to oppose the Sandinista socialist revolution.

The Real Contra War demonstrates that in reality the vast majority of the FDN's combatants were peasants who had the full support of a mass popular movement consisting of the tough, independent inhabitants of Nicaragua's central highlands. The movement was merely the most recent instance of this peasantry's one-thousand-year history of resistance to those they saw as would-be conquerors.

The real Contra War struck root in 1979, even before the Sandinistas took power and, during the next two years, grew swiftly as a reaction both to revolutionary expropriations of small farms and to the physical abuse of all who resisted. Only in 1982 did an offer of American arms persuade these highlanders to forge an alliance with former Guardia anti-Sandinista exiles--those the outside world called Contras.

Relying on original documents, interviews with veterans, and other primary sources, Brown contradicts conventional wisdom about the Contras, debunking most of what has been written about the movement's leaders, origins, aims, and foreign support.