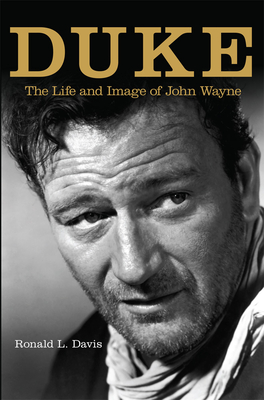 The Life and Image of John Wayne

Almost two decades after his death, John Wayne is still America's favorite movie star. More than an actor, Wayne is a cultural icon whose stature seems to grow with the passage of time. In this illuminating biography, Ronald L. Davis focuses on Wayne's human side, portraying a complex personality defined by frailty and insecurity as well as by courage and strength.

Davis traces Wayne's story from its beginnings in Winterset, Iowa, to his death in 1979. This is not a story of instant fame: only after a decade in budget westerns did Wayne receive serious consideration, for his performance in John Ford's 1939 film Stagecoach. From that point on, his skills and popularity grew as he appeared in such classics as Fort Apache, Red River, She Wore a Yellow Ribbon, The Quiet Man, The Searches, The Man who Shot Liberty Valance, and True Grit. A man's ideal more than a woman's, Wayne earned his popularity without becoming either a great actor or a sex symbol. In all his films, whatever the character, John Wayne portrayed John Wayne, a persona he created for himself: the tough, gritty loner whose mission was to uphold the frontier's--and the nation's--traditional values.

To depict the different facets of Wayne's life and career, Davis draws on a range of primary and secondary sources, most notably exclusive interviews with the people who knew Wayne well, including the actor's costar Maureen O'Hara and his widow, Pilar Wayne. The result is a well-balanced, highly engaging portrait of a man whose private identity was eventually overshadowed by his screen persona--until he came to represent America itself.