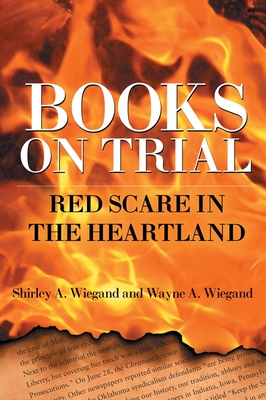 Red Scare in the Heartland

Between the two major red scares of the twentieth century, a police raid on a Communist Party bookstore in Oklahoma City marked an important lesson in the history of American freedom.

In a raid on the Progressive Bookstore in 1940, local officials seized thousands of books and pamphlets and arrested twenty customers and proprietors. All were detained incommunicado and many were held for months on unreasonably high bail. Four were tried for violating Oklahoma's "criminal syndicalism" law, and their convictions and ten-year sentences caused a nationwide furor. After protests from labor unions, churches, publishers, academics, librarians, the American Civil Liberties Union, members of the literary world, and prominent individuals ranging from Woody Guthrie to Eleanor Roosevelt, the convictions were overturned on appeal.

Shirley A. Wiegand and Wayne A. Wiegand share the compelling story of this important case for the first time. They reveal how state power--with support from local media and businesses--was used to trample individuals' civil rights during an era in which citizens were gripped by fear of foreign subversion.

Richly detailed and colorfully told, Books on Trial is a sobering story of innocent people swept up in the hysteria of their times. It marks a fascinating and unnerving chapter in the history of Oklahoma and of the First Amendment. In today's climate of shadowy foreign threats--also full of unease about the way government curtails freedom in the name of protecting its citizens--the past speaks to the present.