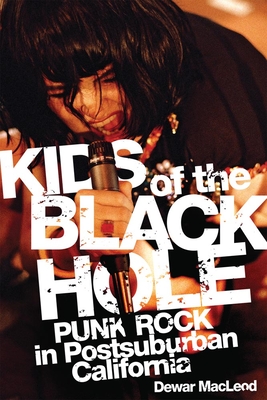 Kids of the Black Hole

Los Angeles rock generally conjures memories of surf music, The Doors, or Laurel Canyon folkies. But punk? L.A.'s punk scene, while not as notorious as that of New York City, emerged full-throated in 1977 and boasted bands like The Germs, X, and Black Flag. This book explores how, in the land of the Beach Boys, punk rock took hold.

As a teenager, Dewar MacLeod witnessed firsthand the emergence of the punk subculture in Southern California. As a scholar, he reveals in this book the origins of an as-yet-uncharted revolution. Having combed countless fanzines and interviewed key participants, he shows how a marginal scene became a "mass subculture" that democratized performance art, and he captures the excitement and creativity of a neglected episode in rock history.

Kids of the Black Hole tells how L.A. punk developed, fueled by youth unemployment and alienation, social conservatism, and the spare landscape of suburban sprawl communities; how it responded to the wider cultural influences of Southern California life, from freeways to architecture to getting high; and how L.A. punks borrowed from their New York and London forebears to create their own distinctive subculture. Along the way, MacLeod not only teases out the differences between the New York and L.A. scenes but also distinguishes between local styles, from Hollywood's avant-garde to Orange County's hardcore.

With an intimate knowledge of bands, venues, and zines, MacLeod cuts to the heart of L.A. punk as no one has before. Told in lively prose that will satisfy fans, Kids of the Black Hole will also enlighten historians of American suburbia and of youth and popular culture.