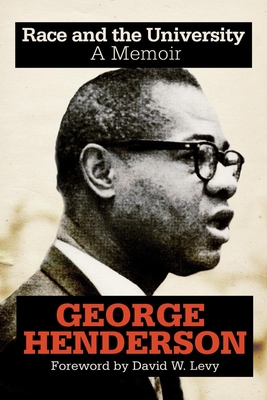 Race and the University (Hardcover)

In 1967, George Henderson, the son of uneducated Alabama sharecroppers, accepted a full-time professorship at the University of Oklahoma, despite his mentor's warning to avoid the "redneck school in a backward state." Henderson became the university's third African American professor, a hire that seemed to suggest the dissolving of racial divides. However, when real estate agents in the university town of Norman denied the Henderson family their first three choices of homes, the sociologist and educator realized he still faced some formidable challenges.

In this stirring memoir, Henderson recounts his formative years at the University of Oklahoma, during the late 1960s and early 1970s. He describes in graphic detail the obstacles that he and other African Americans faced within the university community, a place of "white privilege, black separatism, and campus-wide indifference to bigotry." As an adviser and mentor to young black students who wanted to do something about these conditions, Henderson found himself at the forefront of collective efforts to improve race relations at the university. Henderson is quick to acknowledge that he and his fellow activists did not abolish all vestiges of racial oppression. But they set in motion a host of institutional changes that continue to this day. In Henderson's words, "we were ordinary people who sometimes did extraordinary things."

Capturing what was perhaps the most tumultuous era in the history of American higher education, Race and the University includes valuable recollections of former student activists who helped transform the University of Oklahoma into one of the nation's most diverse college campuses.