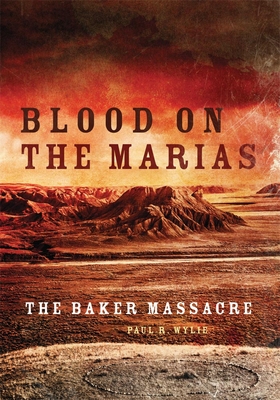 Blood on the Marias (Hardcover)

On the morning of January 23, 1870, troops of the 2nd U.S. Cavalry attacked a Piegan Indian village on the Marias River in Montana Territory, killing many more than the army's count of 173, most of them women, children, and old men. The village was afflicted with smallpox. Worse, it was the wrong encampment. Intended as a retaliation against Mountain Chief's renegade band, the massacre sparked public outrage when news sources revealed that the battalion had attacked Heavy Runner's innocent village--and that guides had told its inebriated commander, Major Eugene Baker, he was on the wrong trail, but he struck anyway. Remembered as one of the most heinous incidents of the Indian Wars, the Baker Massacre has often been overshadowed by the better-known Battle of the Little Bighorn and has never received full treatment until now.

Author Paul R. Wylie plumbs the history of Euro-American involvement with the Piegans, who were members of the Blackfeet Confederacy. His research shows the tribe was trading furs for whiskey with the Hudson's Bay Company before Meriwether Lewis encountered them in 1806. As American fur traders and trappers moved into the region, the U.S. government soon followed, making treaties it did not honor. When the gold rush started in the 1860s and the U.S. Army arrived, pressure from Montana citizens to control the Piegans and make the territory safe led Generals William Tecumseh Sherman and Philip H. Sheridan to send Baker and the 2nd Cavalry, with tragic consequences. Although these generals sought to dictate press coverage thereafter, news of the cruelty of the killings appeared in the New York Times, which called the massacre "a more shocking affair than the sacking of Black Kettle's camp on the Washita" two years earlier.

While other scholars have written about the Baker Massacre in related contexts, Blood on the Marias gives this infamous event the definitive treatment it deserves. Baker's inept command lit the spark of violence, but decades of tension between Piegans and whites set the stage for a brutal and too-often-forgotten incident.