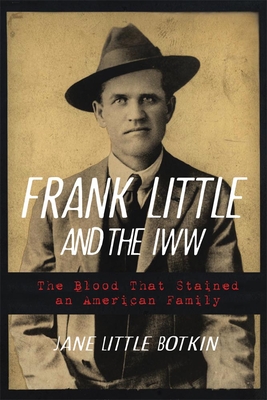 Frank Little and the Iww

The Blood That Stained an American Family

Franklin Henry Little (1878-1917), an organizer for the Western Federation of Miners and the Industrial Workers of the World (IWW), fought in some of the early twentieth century's most contentious labor and free-speech struggles. Following his lynching in Butte, Montana, his life and legacy became shrouded in tragedy and family secrets. In Frank Little and the IWW, author Jane Little Botkin chronicles her great-granduncle's fascinating life and reveals its connections to the history of American labor and the first Red Scare. Beginning with Little's childhood in Missouri and territorial Oklahoma, Botkin recounts his evolution as a renowned organizer and agitator on behalf of workers in corporate agriculture, oil, logging, and mining. Frank Little traveled the West and Midwest to gather workers beneath the banner of the Wobblies (as IWW members were known), making soapbox speeches on city street corners, organizing strikes, and writing polemics against unfair labor practices. His brother and sister-in-law also joined the fight for labor, but it was Frank who led the charge--and who was regularly threatened, incarcerated, and assaulted for his efforts. In his final battles in Arizona and Montana, Botkin shows, Little and the IWW leadership faced their strongest opponent yet as powerful copper magnates countered union efforts with deep-laid networks of spies and gunmen, an antilabor press, and local vigilantes. For a time, Frank Little's murder became a rallying cry for the IWW. But after the United States entered the Great War and Congress passed the Sedition Act (1918) to ensure support for the war effort, many politicians and corporations used the act to target labor "radicals," squelch dissent, and inspire vigilantism. Like other wage-working families smeared with the traitor label, the Little family endured raids, arrests, and indictments in IWW trials. Having scoured the West for firsthand sources in family, library, and museum collections, Botkin melds the personal narrative of an American family with the story of the labor movements that once shook the nation to its core. In doing so, she throws into sharp relief the lingering consequences of political repression.