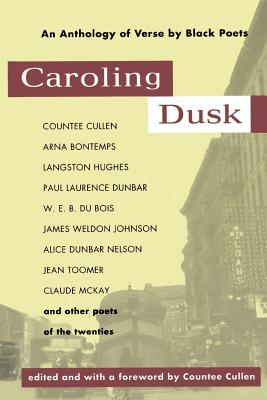 An Anthology of Verse by Black Poets of the Twenties

This selection from the work of thirty-eight poets was made by Countee Cullen in 1927. His stated purpose at the time was to bring together a miscellany of deeply appreciated but scattered verse.

Beginning with the work of Paul Laurence Dunbar, who, though there were black poets before him, is generally credited as the first black poet to make a deep impression on the literary world, the book includes the writings of James Weldon Johnson, W. E. B. Du Bois, Jessie Faucet, Sterling A. Brown, Arna Bontemps, Langston Hughes, and Countee Cullen himself, to name only a few.

Most of the poets became well known and widely published in the years that followed. These poems remain powerful statements of what it means to be human, whatever the race.

Long out of print, "Caroling Dusk" is a valuable addition to the body of black literature. This is the first time the anthology has appeared in a paperback edition.