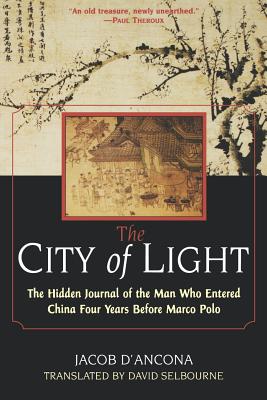 The City of Light

In 1270 a scholarly Jewish merchant called Jacob d'Ancona set out on a voyage from Italy. A year later, he arrived in China at the coastal metropolis of Zaitun, the "City of Light" (now known as Quanzhou), four years before Marco Polo arrived at Xanadu in 1275. Nothing was known of this epochal journey until 1990, when David Selbourne was shown d'Ancona's account of his travels, a remarkable manuscript that had been hidden from public view for more than seven centuries. Eventually translated and edited by Selbourne and published in Great Britain in October 1997 as The City of Light, the account was praised as providing an unparalleled insight into life in the medieval world.
Vivid and insightful, this account has great historical significance. It not only describes the adventures of a medieval trader, but also comments on Chinese society and manners through the eyes of a European man of learning. The City of Light brings spectacularly to life d'Ancona's encounter with one of the world's great civilizations.