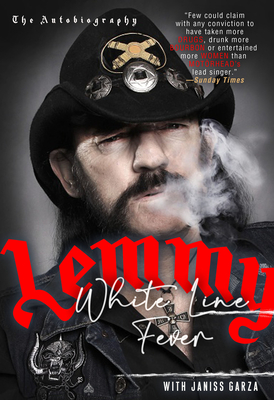 After years of notorious excess, his blood would kill another human being. This is the story of the heaviest drinking, most oversexed speed freak in the music business.

Ian Fraser Kilmister was born on Christmas Eve, 1945. Learning from an early age that chicks really do appreciate a guy with a guitar, and inspired by the music of Elvis and Buddy Holly, Lemmy quickly outgrew his local bands in Wales, choosing instead to head to Manchester to experience everything he could get his hands on. And he never looked back.

Lemmy tripped through his early career with the Rocking Vicars, backstage touring with Jimi Hendrix, as a member of Opal Butterflies and Hawkwind. In 1975, he went on to create speed metal and form the legendary band Motorhead.

During their twenty-seven-year history, Motorhead has released 21 albums, been nominated for a Grammy, and conquered the rock world with such songs as “Ace of Spades,” “Bomber,” and “Overkill.” Throughout the creation of this impressive discography, the Motorhead lineup has seen many changes, but Lemmy has always been firmly at the helm.

White Line Fever, a headbanging tour of the excesses of a man being true to his music and his pleasures, offers a sometimes hilarious, often outrageous, but always highly entertaining ride with the frontman of the loudest rock band in the world.

Since 1987, Janiss Garza has been writing about very loud rock and alternative music. From 1989 to 1996, she was senior editor at RIP, at the time the world’s premier hard music magazine. She has also written for the Los Angeles Times, Entertainment Weekly, and the New York Times. She cowrote White Line Fever with Motorhead founder Lemmy Kilmister.

Lemmy Kilmister was born in Stoke-on-Trent, Wales. Having been a member of the Rockin' Vicars, Opal Butterflies, and Hawkwind, he formed Motorhead, the legendary English heavy metal band.

Kilmister has been credited as an enormous influence on the genres of rock, heavy metal, death metal, punk, and speed metal. He turned out scores of albums and toured prolifically.  He was also the author of White Line Fever: The Autobiography. Kilmister died December 28, 1015, of cancer and heart failure, leaving behind a huge musical legacy.
Loading...
or support indie stores by buying on