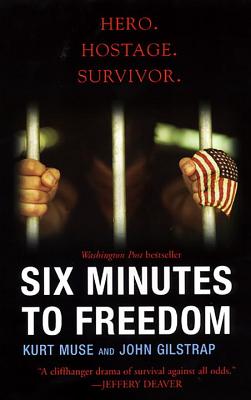 Dear President Bush,
My name is Kimberly Anne Muse. I am writing this letter not for me but for my father, Kurt Frederick Muse. As you should know by now, he is a political prisoner in Panama. . ..

Born in the United States and raised in Panama, Kurt Muse grew up with a deep love for his adopted country. But the crushing regime of General Manuel Noriega in the late 1980s threatened his, and a nation's, freedom. A nightmare of murder and unexplained disappearances compelled Kurt and a few trusted friends to begin a clandestine radio campaign, urging the people of Panama to rise up for their basic human rights.

Six Minutes to Freedom is the remarkable tale of Kurt Muse's arrest and harrowing months of imprisonment; his eyewitness accounts of torture; and the plight of his family as they fled for their lives. It is also the heart-pounding account of the only American civilian ever rescued by the elite Delta Force. Timelier than ever, this is a thrilling and highly personal narrative about one man's courage and dedication to his beliefs.

"A cliffhanger drama of survival against all odds." --Jeffery Deaver

"A must-read for anyone interested in how Delta Force operates." --John Weisman

"A thrilling chronicle that puts a human face on unspeakable actions." --Continental magazine

A Featured Alternate of the Military Book Club

Kurt Muse, an American citizen, grew up in Panama with a deep love for his adopted country. His patriotic activities led to his imprisonment in the notorious Modelo prison in Panama City. As his hope for survival grew dim, he became the first civilian ever rescued by the elite Delta Force. Now reunited with his loved ones, he lives in Fairfax, VA. An exhibit at the Airborne and Special Operations in Fayetteville, NC, commemorates his ordeal and the heroism of his rescuers.

John Gilstrap is the New York Times bestselling author of the Jonathan Grave thriller series and other fiction and nonfiction. His novel Against All Enemies won the award for best paperback original of 2015 given by the International Thriller Writers. His books have been translated into more than twenty languages. An explosives safety expert and former firefighter, he holds a master’s degree from the University of Southern California and a bachelor’s degree from the College of William and Mary in Virginia. He lives in Fairfax, Virginia. Please visit him on Facebook or at www.johngilstrap.com.
or
Not Currently Available for Direct Purchase
Copyright © 2020 American Booksellers Association