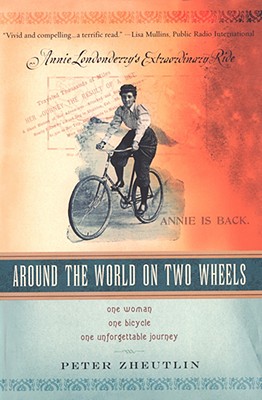 Around the World on Two Wheels

"Peter Zheutlin's thoroughly researched account will make you wish you'd been around to catch a glimpse of the extraordinary woman as she went wheeling by." -Bill Littlefield, National Public Radio's Only A Game Until 1894 there were no female sport stars, no product endorsement deals, and no young mothers with the chutzpah to circle the globe on a bicycle. Annie Londonderry changed all of that. When Annie left Boston in June of that year, she was a brash young lady with a 42-pound bicycle, a revolver, a change of underwear, and a dream of freedom. She was also a feisty mother of three who had become the center of what one newspaper called "one of the most novel wagers ever made" a high-stakes bet between two wealthy merchants that a woman could not ride around the world on a bicycle. The epic journey that followed took the connection between athletics and commercialism to dizzying new heights, and turned Annie Londonderry into a symbol of women's equality. A vastly entertaining blend of social history, high adventure, and maverick marketing, Around the World on Two Wheels is an unforgettable portrait of courage, imagination, and tenacity. "Annie was a remarkable woman and well worth getting to know." -Booklist "A wonderful telling of one of the most intriguing, offbeat, and until now, lost chapters in the history of cycling." -David Herlihy, author of Bicycle: The History.