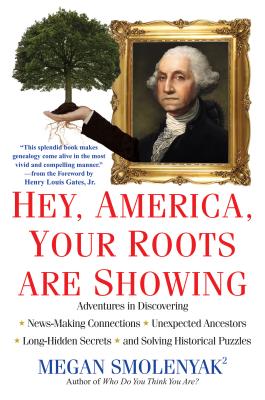 You've heard of the Dog Whisperer? Meet the Ancestor Rescuer. Part forensic scientist, part master sleuth, Megan Smolenyak has solved some of America's oldest and most fascinating genealogical mysteries. You've read the headlines; now get the inside story as the "Indiana Jones of genealogy" reveals how she cracked her news-making cases, became the face of this increasingly popular field--and redefined history along the way. How did Smolenyak discover Barack Obama's Irish ancestry--and his relation to Brad Pitt? Or the journey of Michelle Obama's family from slavery to the White House? Or the startling links between outspoken politicians Al Sharpton and Strom Thurmond? And why is Smolenyak's name squared? Test your own skills as she shares her exciting secrets. Whether she's scouring websites to uncover the surprising connections between famous figures or using cutting-edge DNA tests to locate family members of fallen soldiers dating back to the Civil War, Smolenyak's historical sleuthing is as provocative, richly layered, and exciting as America itself. "Thank you for taking the time to lay out our family map. . . You're practically family. You certainly know more about us than we do." -Stephen Colbert "Megan is a genealogist's dream, a forensic investigator who can also tell a great story." -Sam Roberts, The New York Times "Megan is a blessing to cold case detectives and a master genealogist." -Julie M. Haney, special agent, NCIS Cold Case Homicide Unit "The Indiana Jones of genealogy. . . Megan Smolenyak is a national treasure." -Buzzy Jackson, author of Shaking the Family Tree "In this breezy narrative, Smolenyak allows us to look over the shoulder of a relentless genealogist as she works the puzzle pieces of her craft. Whether unearthing evidence from Internet databases, newspaper offices, court houses, libraries and cemeteries, consulting translators, historians or her vast network of fellow genealogists, pioneering the use of genealogical DNA testing, solving the mystery or occasionally hitting a brick wall, Smolenyak remains wholly committed, curious and cheery, eager to share her methods and excitement. Bottom-up history from a top-shelf researcher."-Kirkus Review.

Megan Smolenyak is an incurable genealogist who loves solving mysteries, making unexpected discoveries, and pushing the boundaries of conventional genealogy. A popular writer, speaker, and TV guest, she does all she can to get the g-word out there and inspire others in their quest for roots. She has appeared on Good Morning America, the Todayshow, CNN, NPR, and the BBC, and consulted on shows ranging from Who Do You Think You Are? to Top Chef. Megan is the author of six books (including Who Do You Think You Are? The Essential Guide to Tracing Your Family History, companion guide to the NBC series), a Huffington Post contributor, and former chief family historian and spokesperson for Ancestry.com. She lives in southern New Jersey with her husband and lots of research tools.
or support indie stores by buying on
Copyright © 2020 American Booksellers Association