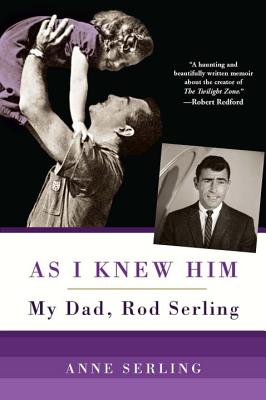 As I Knew Him

In Twilight Zone reruns, I search for my father in the man on the screen, but I can't always find him there. Instead, he appears in unexpected ways. Memory summoned by a certain light, a color, a smell--and I see him again on the porch of our old red lakeside cottage, where I danced on the steps as a child.

To Anne Serling, the imposing figure the public saw hosting The Twilight Zone each week, intoning cautionary observations about fate, chance, and humanity, was not the father she knew. Her fun-loving dad would play on the floor with the dogs, had nicknames for everyone in the family, and was apt to put a lampshade on his head and break out in song. He was her best friend, her playmate, and her confidant.

After his unexpected death at 50, Anne, just 20, was left stunned. Gradually, she found solace for her grief by talking to his friends, poring over old correspondence, and recording her childhood memories. Now she shares personal photos, eloquent, revealing letters, and beautifully rendered scenes of his childhood, war years, and their family's time together. Idyllic summers in upstate New York, the years in Los Angeles, and the myriad ways he filled their time with laughter, strength, and endearing silliness--all are captured here with deep affection and candor.

Though begun in loss, Anne's story is a celebration of her extraordinary relationship with her father and the qualities she came to prize through him--empathy, kindness, and an uncompromising sense of social justice. As I Knew Him is a lyrical, intimate tribute to Rod Serling's legacy as visionary, storyteller, and humanist, and a moving testament to the love between fathers and daughters.

"I was so moved by Anne Serling's account of the loving relationship she had with her dad, I laughed and I cried. I plan to read it again once I catch my breath. This beautifully written book is proof that the apple didn't fall too far from the tree when it came to the writing gene." --Carol Burnett

"It was my privilege to know Rod Serling. He was as interesting off screen as on. I loved Rod Serling. Still do." --Betty White

"Thanks to Anne Serling's haunting and beautifully written memoir about her father, readers will come to know Rod Serling in a personal way, as I did." --Robert Redford

"A loving daughter's intimate memoir and portrait of her father, a man who just happens to be one of the most important American cultural leaders of the 20th Century . . . the best glimpse we're likely to get of that man and the maelstrom he moved in unless or until we venture into the Twilight Zone." -- James Grady

"A memoir filled with intimate details and emotion; a tender, thoughtful and very personal portrait of American genius Rod Serling, writer and creator of the greatest show ever made, The Twilight Zone." --- Alice Hoffman

"A richly told, deeply sympathetic journey into the mind of one of the masters of television, this haunting memoir is also about grief, creativity, and a father-daughter bond as memorable and magical as any Twilight Zone episode." --Caroline Leavitt

Before becoming a full-time writer, Anne Serling was an early childhood teacher with a bachelor’s degree from Elmira College. She serves on the board of directors of the Rod Serling Memorial Foundation and is involved with the Rod Serling School of Fine Arts “Fifth Dimension” program. She lives in New York. Visit her at www.anneserling.com or on Facebook.
Loading...
or
Not Currently Available for Direct Purchase