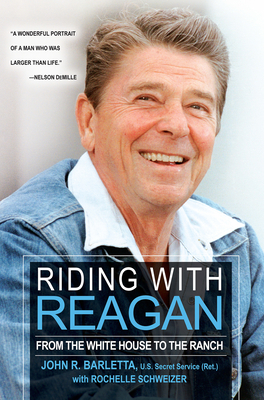 From the White House to the Ranch

Personal moments with an American legend . . .

John Barletta was a Vietnam veteran and Secret Service agent with a lifelong passion for horses and a deep respect for the nation’s new president, Ronald Reagan. After he was chosen to lead the president’s equestrian protection team in 1981, Barletta became the president’s riding partner on the dusty trails of his California ranch, at Camp David, and even at Windsor Castle.  During their nearly twenty-year relationship, Barletta would come to know Ronald Reagan as few others did—as a loving husband and father, as a man of courage and conviction, and as a friend and confidant.

Filled with heartwarming stories, humorous anecdotes, and history-making events, this is a moving, intimate portrait of a great man whose heart, wisdom, and all-American spirit continue to inspire.

“A unique perspective of President Reagan—both in and out of the saddle.”
—Judge William Clark, former National Security Advisor and Secretary of the Interior

John R. Barletta served his country as a member of the U.S. Army 7th Cavalry Division before joining the Secret Service in 1974 as a special agent. He was transferred to the Presidential Protective Division at the White House in 1978, during the Carter Administration. After President Ronald Reagan took office, John Barletta was placed in charge of the equestrian team because of his love of horses and his mastery of riding. In 1987 he was assigned to the Western Protective Division, in charge of the ranch detail. When the Reagans left the White House, he was transferred to the Reagan Protective Division in Los Angeles as the assistant special agent in charge (ASAIC). He retired from the Secret Service in 1997. Originally from Somerville, Massachusetts, he lives in Santa Barbara, California.

Rochelle Schweizer is the author of She’s the Boss: The Dangerous Truth About Nancy Pelosi and (with her husband, Peter) of The Bushes: Portrait of a Dynasty and Disney: The Mouse Betrayed. She has appeared on CBS This Morning, MSNBC, Fox and Friends, and CNN. She lives in Tallahassee, Florida.
Loading...
or
Not Currently Available for Direct Purchase