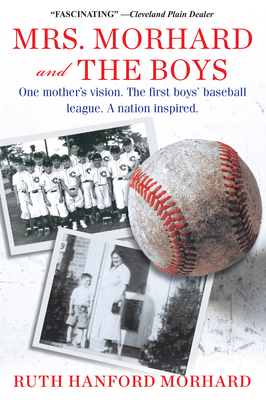 Mrs. Morhard and the Boys

With the nation in the grip of the Great Depression, a single mother in Cleveland, Ohio, creates a lasting monument to youth and community as American as apple pie.

At twelve years old, fiercely independent Josephine Morhard left her family’s Pennsylvania farm to start a new life. After surviving two bad marriages, Josephine decides to focus on a better future for her daughter and son. But Junior is a volatile boy of eight—until his mother comes up with a novel plan to build discipline and self-worth in her son. Out of a dream, an empty lot, and the enthusiasm of other neighborhood kids, Josephine establishes the first boys’ baseball league in America.

Beyond all expectations, the Cleveland Indians rally behind her project. Future baseball legends Bob Feller, Jeff Heath, and Roy Weatherly help hone the boys’ skills; renowned sports reporter Hal Lebovitz pitches in as an umpire; and they’re given free pass to play in historic League Park. As Josephine’s Little Indians graduate into the Junior American and Junior National Leagues, and finally a Little World Series, she instills in her boys strong values, good sportsmanship, and an unprecedented sense of accomplishment. Some of them, like Ray Lindquist and Jack Heinen, will even make it to the Minor Leagues. Not one of Mrs. Morhard’s boys would ever forget her.

“Beautifully tells the true story of how one mother kept her son out of trouble . . . and started the first boy’s baseball league.”
—Delilah, Syndicated Radio Host

Praise For Mrs. Morhard and the Boys: One mother's vision. The first boys' baseball league. A nation inspired.…

“Josephine Morhard is a heroine for our times: A devoted single mother who never took no for an answer, she single-handedly started the first boys' baseball league in America. Josephine enriched the lives of countless young boys and shaped American baseball history. Her daughter-in-law, Ruth Morhard, is a deft biographer and has written a narrative that reads like the best old movies: charming, vivid, and inspirational.”
—Anne Zimmerman, author of AN EXTRAVAGANT HUNGER: THE PASSIONATE YEARS OF M.F.K. FISHER

"Mrs. Morhard and the Boys is a spectacular baseball story. Charmingly written, powerful in its message, and interesting in its subject matter, Ruth Hanford Morhard’s book deserves to be counted as a gem in the genre of sports literature.”
—Bronx Pinstripes

Ruth Hanford Morhard holds a Certificate in Creative Nonfiction from Stanford University. As head of Ruth Reid & Company, her day job is marketing and communications consultant to national and regional institutions. She has been a senior executive with major philanthropic and arts institutions and has taught public relations writing. Morhard lives in Chardon, Ohio, with her husband Al, son of Josephine Morhard.
Loading...
or support indie stores by buying on