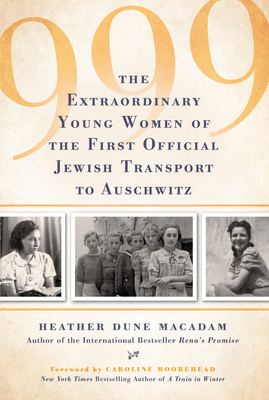 The untold story of some of WW2’s most hidden figures and the heartbreaking tragedy that unites them all. Readers of Born Survivors and A Train Near Magdeburg will devour the tragic tale of the first 999 women in Auschwitz concentration camp. This is the hauntingly resonant true story that everyone should know.

On March 25, 1942, nearly a thousand young, unmarried Jewish women boarded a train in Poprad, Slovakia. Filled with a sense of adventure and national pride, they left their parents’ homes wearing their best clothes and confidently waving good-bye. Believing they were going to work in a factory for a few months, they were eager to report for government service. Instead, the young women—many of them teenagers—were sent to Auschwitz. Their government paid 500 Reich Marks (about $200) apiece for the Nazis to take them as slave labor. Of those 999 innocent deportees, only a few would survive.

The facts of the first official Jewish transport to Auschwitz are little known, yet profoundly relevant today. These were not resistance fighters or prisoners of war. There were no men among them. Sent to almost certain death, the young women were powerless and insignificant not only because they were Jewish—but also because they were female. Now acclaimed author Heather Dune Macadam reveals their poignant stories, drawing on extensive interviews with survivors, and consulting with historians, witnesses, and relatives of those first deportees to create an important addition to Holocaust literature and women’s history.

Includes a foreword by Caroline Moorehead, NYT bestselling author of A Train in Winter!

“A fresh, remarkable story of Auschwitz on the 75th anniversary of its liberation.  An uplifting story of the herculean strength of young girls in a staggeringly harrowing situation.”
—Kirkus

Praise For 999: The Extraordinary Young Women of the First Official Jewish Transport to Auschwitz…

“Almost one thousand young Jewish women, some no older than sixteen, were rounded up across Slovakia in the spring of 1942 and told that they were being sent to do government work service in newly occupied Poland, and that they would be away no more than a few months. Very few returned. Macadam has managed to recreate not only the backgrounds of the women on the first convoy but also their day to day lives—and deaths—during their years in Auschwitz. Books such as this one are essential: they remind modern readers of events that should never be forgotten.”
—From the foreword by Caroline Moorehead, New York Times bestselling author of A Train in Winter

“A staggering narrative about the forgotten women of the Holocaust.  In a profound work of scholarship, Heather Dune Macadam reveals how young women helped each other survive one of the most egregious events in human history. Her book also offers insight into the passage of these women into adulthood, and their children, as ‘secondhand survivors.’”
—Gail Sheehy, New York Times bestselling author of Passages and Daring: My Passages

“An important addition to the annals of the Holocaust, as well as women’s history. Not everyone could handle such material, but Heather Dune Macadam is deeply qualified, insightful and perceptive.”
—Susan Lacy, creator of the American Masters series and filmmaker

“However much one reads about the Holocaust there is always something more with the power to shock. The story of these teenage girls is truly extraordinary. Congratulations to Heather Dune Macadam for enabling the rest of us to sit down and just marvel at how on earth they did it.”
—Anne Sebba, New York Times bestselling author of Les Parisiennes and That Woman

“A fresh, remarkable story of Auschwitz, on the 75th anniversary of its liberation. Dune Macadam (co-author: Rena's Promise: A Story of Sisters in Auschwitz, 1995) chronicles the tale of nearly 1,000 Jewish women from Slovakia, the first women to be shipped to the Polish death camp. While not the majority of inmates, a majority of the Slovakian Jews were sent there. The author makes great use of her "interviews with witnesses, survivors, and families, and USC Shoah Archive testimonies." Most readers have learned about the many shocking aspects of the camps, including slave labor and other countless deprivations, but the author shows us how every time a train pulled in, there would be a selection, for work or extermination; the same would occur at morning roll call. There was no rhyme nor reason to the selection process; it was often just a whim. Those women in this first shipment were tattooed beginning with the number 1,000, but within a year, they were numbering nearly 39,000. As Dune Macadam notes, there were some work assignments that were safer and slightly more comfortable: sewing, laundry, mail, clerical and, hospital. The most sought-after assignment was sorting the clothes of new arrivals. Often, the women would find a piece of bread or other contraband they could carefully smuggle out. One woman found a tube of diamonds. When she was caught, she claimed she was saving it for one of the Nazis in charge; she got off, and he took leave, bought a farm, and never returned. Throughout the book, readers will be consistently astounded by the strength of these women. They fought desperately to survive and supported each other, often literally holding up friends and hiding sick inmates. "My goal," writes Dune Macadam in an author's note, "is to build as complete a picture as I can of the girls and young women of the first ‘official' Jewish transport to Auschwitz." It's not easy reading, but consider that goal achieved. An uplifting story of the herculean strength of young girls in a staggeringly harrowing situation.”
—Kirkus

“In this intimate and harrowing account, historian and novelist Macadam (coauthor, Rena’s Promise) reconstructs the lives of dozens of young Jewish women who were on the first convoy to arrive at Auschwitz in March 1942…  This careful, sympathetic history illuminates an incomprehensible human tragedy.”
—Publishers Weekly

Heather Dune Macadam’s first book, co-authored with Rena Kornreich Gelissen, was Rena’s Promise: A Story of Sisters in Auschwitz. Rena’s Promise has been published throughout the world. Director of the Rena’s Promise Foundation, Macadam also sits on the advisory board of the Cities of Peace Auschwitz and is the producer/director of the documentary film 999: The Extraordinary Young Women of the First Official Jewish Transport to Auschwitz. Her work has been recognized by Yad Vashem in the U.K., the USC Shoah Foundation, the National Museum of Jewish History in Bratislava, Slovakia, and the Memorial Museum of Auschwitz in Oswiecim, Poland. Her writing has been featured in National Geographic, The New York Times, The Guardian, on NPR, and in other major media outlets. She divides her time between New York and Herefordshire, England. Visit 999thefirstwomeninauschwitz on Facebook, @heatherdune on Twitter, or www.999themovie.com.

2. Macadam, along with several families, retraced the girls’ journey to Auschwitz and then on to Birkenau. How did that experience inform her descriptions of their passage?  How did she use that first-hand information to make it more immediate for you?

3. In reading about the Nazis’ government-mandated separations, deportations, and resettlements of Jewish people, how did you feel reading the book about these separations?  What did you think about when people had their belongings taken away, then their children?

4. Much of the book’s tragedy comes from the deep loss of their tight-knit community – the collective loss of their loved ones and neighbors, how and why they are targeted by the law, how they are lied to, the coded messages their daughters send to them.  How do these horrors make you think about your own life?

5. 999 reviews how the government justified its actions, how the press disseminated falsehoods about the Jews resettlements with fake pictures, misleading headlines, and manipulative articles.  How does this make you think about “fake news”?

6. One of the ways the sisters survive is by securing “decent work,” not manual labor, that would protect them from potential accidental and mortal hazards, and improve their physical conditions, but it could not save those you loved. How does this revise your view of the work, of the power you have over your own life?

7. 999 describes how the strong survive and the weak are exterminated. Today the weak are tended to in order to grow strong again.  What kinds of emotions do you feel upon reading of this reversal of humanity – dread, pity, horror, shock, disbelief?

8. The book highlights the entwined lives of two sisters and their friend. Which one of the three women’s stories did you find most compelling, and why?